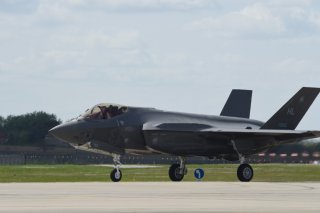 According to defense writer Jennifer Svan at Stars and Stripes, the four planes—fresh off the Lockheed Martin production line in Fort Worth, Texas—were part of the initial delivery to the fighter base in Suffolk, per U.S. Air Forces in Europe–Air Forces Africa. The site was first selected in 2015 to host the jets.

Svan noted that “deliveries were slated to begin in 2020 but were pushed back, in part because of construction delays at the facilities being built to support the fifth-generation fighters,” adding that the planes “will belong to the 495th Fighter Squadron, nicknamed the Valkyries, after the mythological Norsewomen who chose who would live or die in battle.”

“The Valkyries are leading our F-35 integration across Europe,” Gen. Jeff Harrigian, the commander of USAFE-AFAFRICA, said in a statement.

The squadron will boast a total of twenty-four aircraft, which will be delivered to RAF Lakenheath in phases, according to USAFE-AFAFRICA officials. There will eventually be two F-35A squadrons.

During the reactivation ceremony in October, Lt. Col. Ian McLaughlin, the commander of the squadron, noted that “there has been a great deal of work done to get us this far, but there’s a lot more that needs to be done prior to getting jets this winter.”

According to Military.com, the North Atlantic Treaty Organization (NATO) is also aiming for an even larger presence of the F-35s on the continent. Air Force Gen. Tod Wolters, who leads the U.S. European Command and is NATO’s supreme allied commander for Europe, has confirmed that the coalition will continue to build up its F-35 fighter capability in the coming years.

“The U.S. and other NATO allies could have four hundred fifty F-35s stationed in Europe by 2030, Wolters predicted during a June Atlantic Council discussion,” the site writes.

“Allies such as the U.K., Norway, Italy, the Netherlands, and Denmark have at least forty-nine F-35s, and dozens more are on the way,” it continues.

Furthermore, a new classified Pentagon report is recommending that more U.S. military resources—which include the F-35 Lightning II and other fighter jets—should be deployed to Australia and Guam to better keep pace with the ever-growing Chinese military in the Indo-Pacific region.

The report—known as the Global Posture Review—is designed to help the U.S. military decide where to position various forces across the world over the next two to three years.

“Direction from the (review) will strengthen the (Defense Department’s) focus on China by reducing posture requirements in other theaters to enable improved warfighting readiness and increase activities in the Indo-Pacific,” a senior defense official recently told reporters at the Pentagon on condition of anonymity.