F-35B: The Special Stealth Fighter China Has No Answer For 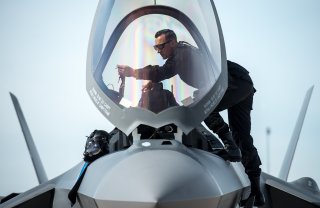 The first-of-its-kind F-35B fighter jet with short-takeoff-and-vertical-landing capability is now a threat factor possessed by U.S. Navy amphibious assault ships across the world. The jet has many merits yet one key factor eclipses all of the others: China does not have an equivalent.

Why China Fears the F-35B

It is well known that China is rapidly developing an aircraft-carrier-launched variant of its fifth-generation J-31 aircraft to perhaps rival the F-35B and F-35C jets when it comes to maritime warfare power projection. But there does not appear to be any kind of vertical-takeoff capability emerging within the Chinese military. This is important because a vertical takeoff and “hover” ability bring an entirely new dimension to maritime warfare. The technology allows a smaller ship (such as an amphibious ship) to operate with the kind of fifth-generation fixed-wing fighter jet support typically thought of as only being possible with aircraft carriers. That would allow an amphibious assault operation to rely on its own organic fifth-generation air support.

Should amphibious assault vehicles, ship-to-shore transport landing craft, Osprey helicopters, and attack drone vessels all launch from an amphibious ready group, then the military force would not need to rely upon fighter jet support from aircraft carriers within striking range. The USS America, the first of the Navy’s now emerging America-class amphibious ships, has traveled long distances of key deployments carrying as many as thirteen F-35B jets on board. The America-class amphibious ships have been specifically modified and engineered to house and operate F-35B jets.

The F-35B jet’s ability to “hover” can bring previously unanticipated advantages to an amphibious assault given the aircraft’s “drone-like” ability to conduct intelligence, surveillance and reconnaissance missions. Its 360-degree cameras, long-range, targeting technology and onboard computing enable the aircraft to gather and disseminate various video feeds from great distances. This, combined with its ability to hover above the surface in support of an approaching amphibious operation, might provide an attacking force with new levels of forward visual “scouting,” threat assessments or close-air-support capability. Of course, that hover ability, assisted by advanced automation and software, is what enables an F-35B jet to perform a vertical landing on an amphibious ship without needing a runway.

The F-35B jet is able to hover due to through the construction of a “lift fan” technology that was built into the center fuselage, which is just behind the pilot. This generates massive downward vertical thrust, sending horsepower to the LiftFan from the main engine through a “spiral belevel gear system,” according to Rolls-Royce, which has a division dedicated to making engines for military equipment.

The LiftFan looks like a square door on top of the fuselage behind the pilot intended to generate the downward airflow needed to enable vertical landing. The LiftFan feeds air into the engine much like any aircraft engine would in some respects. Air ducts on either side of the nose “suck” in air to the engine, the air is then compressed before being ignited with gas—generating what looks like a controlled explosion of fire coming out of the back. The force generated through this process enables the speed, maneuverability, and acceleration of the aircraft. Mechanical information provided by Rolls-Royce, which makes the F-35B engine, states that “to achieve STOVL, the lift fan component of the LiftSystem operates perpendicular to the flow of air over the aircraft.” The LiftFan can operate in crosswinds up to 288mph, according to Rolls-Royce data.

Given all this, if China were to rely on an aircraft carrier capable of launching fifth-generation fighter jets during a military mission, then the country would likely operate at a significant deficit when it comes to countering an amphibious assault or conducting attack operations requiring smaller ships.