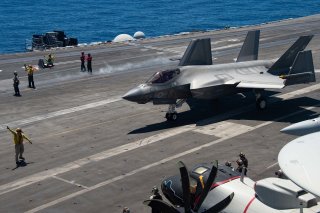 The F-35C reached a milestone when it deployed aboard the USS Carl Vinson in 2021. It was the first time the carrier-launched fighter deployed with an air wing on a U.S. Navy aircraft carrier.

The deployment of the F-35C aboard carriers changes the threat equation by multiplying the kinds of dilemmas the U.S. Navy could present to its adversaries. The fifth-generation stealth fighter has been operational for some time, but didn’t deploy aboard a carrier until August 2021.

This new capability better allows the Navy to project power while at sea. Upgraded F/A-18s might have trouble countering advanced Russian or Chinese air defense systems or challenging an enemy’s fifth-generation fighters. The deployment of the F-35C could reshape this dynamic. Using speed and stealth, an F-35C may be able to elude advanced surface-to-air missiles and destroy them from the air. This would open a corridor through which fourth-generation aircraft could attack. The F-35C might also be able to defeat rival fifth-generation assets such as a Chinese J-20 or Russian Su-57.

The F-35C’s broad wingspan, reinforced landing gear, and durable coating make it engineered for harsh conditions at sea.The F-35C's fifty-one-foot wingspan is larger than the Air Force's F-35A and Marine Corps' F-35B short take-off-and-landing variants. Its avionics equip the pilot with real-time access to battlespace information. It can fire two AIM-120 air-to-air missiles and two 2,000-pound Joint Direct Attack Munitions. The F-35C can reach speeds up to Mach 1.6 and travel more than 1,200 nautical miles, according to the Navy.

The F-35C is also engineered with the technical infrastructure to accommodate new weapons and software upgrades as they emerge, allowing the aircraft to adapt to changing threats.

The Navy plans to acquire two hundred seventy-three F-35Cs. Some wonder whether that is enough, though. If the Navy operates as many as eleven aircraft carriers, does will fewer than three hundred F-35Cs be enough in a great power conflict? This might be critical in the Pacific where basing fifth-generation aircraft on land would be more difficult. It would require a large number of carrier-launched F-35Cs to sustain an advantage over Chinese fifth-generation aircraft. This might be one reason why Japan plans to buy one hundred forty-seven F-35s.