F-35s Are Old News: What Would a Sixth Generation Fighter Look Like? 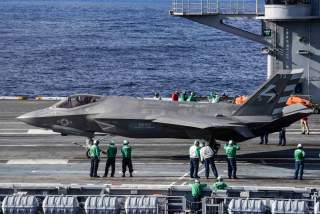 A recent trend in the aerospace world is to divide postwar warplanes into so-called “generations.” These generations are mainly distinguished by time and technology, and the current state of the art lies in “fifth-generation” fighters. Now that at least three countries, the United States, Russia, and China are developing such jets, speculation naturally turns to what comes next. What would a sixth-generation fighter look like, and how would it differ from today’s fighters?

First, let’s discuss what makes a fifth-generation fighter. Fifth-gen fighters are generally known for three things: stealth, sensors, and supercruise. It’s the first generation where stealth is a mandatory requirement, with the shape of the aircraft lowering the jet’s radar signature. While recent advances in radar technology have repeatedly heralded the end of stealth as a feature—including discoveries in the field of quantum radar—many of have been exaggerated and stealth is now as a part of a fighter jet feature set as electronic warfare and radar.

Fifth-generation fighters are also known for their sensor suite, particularly advanced electronically scanned array (AESA) radars and advanced electro-optical sensors that allow adversaries to be detected by their infrared signature at increasing ranges. While many fourth-generation aircraft incorporated these features or were back fitted with them in upgrades, fifth-generation fighters are the first generation where these sensors are mandatory. This category also includes sensor fusion, a broad term that includes projecting real-time video, augmented reality cues, and other data into a pilot’s field of view. Critical to this is the ability to take data from other aircraft, ground, and sea forces and present it as useful data to the fighter pilot.

Finally, fifth-gen fighters demand engines that allow them to cruise above the speed of sound without using afterburners, a technique called “supercruise.” This allows the fighter to get where it wants to go faster, gives it a powerful advantage maneuvering against enemy aircraft, and conserves fuel. While fifth-generation fighters will still use afterburners, they will need such fuel-intensive bursts of speed less frequently.

Lasers. Laser weapons could revolutionize short-range aerial warfare. Currently, fighter jets use chemical energy guns in the 20 to 30-millimeter range. Fifth-generation jets like the F-35 have retained guns but the need to store all weapons, fuels, and sensors inside the aircraft fuselage severely restricts the size of the gun magazine. The F-35A, for example, carries just 182 rounds for its internal four-barrel 25-millimeter gun. Furthermore, the aircraft’s fire control system must account for the velocity of the cannon round, the accuracy of the gun, and the effect of gravity on the round as it travels toward its target.

A laser weapon would be a vast improvement on chemical energy guns. The weapon would simply require the laser and draw power from the aircraft’s engine or engines, storing it and then releasing it in pulses of concentrated light. The laser might need an energy storage system but it would theoretically have an unlimited number of shots. Furthermore, a laser would travel in an absolutely straight line at 186,000 miles a second, making hitting enemy aircraft much easier. A laser in a traversable mount could also act as a defensive weapon system, shooting down incoming air-to-air missiles.

Range. Many of the current fighters in countries in North America, Europe, and Asia are multirole aircraft with a fairly typical combat radius of 670 nautical miles—or less. As attention shifts back to the realm of big power warfare and the prospect of war between the United States, NATO, Russia, and China increases so does the need for long-range. The vastness of the Pacific Ocean, as well as Eastern Europe and European Russia, means that tactical aircraft may have to travel long ranges to reach their targets. This situation is further complicated by the abundance of tactical and short-range ballistic missiles in Russian and Chinese inventories, and efforts by both countries to cripple U.S. and NATO airpower by targeting tankers and early warning aircraft with long-range missiles.

The need for modern aircraft to conceal everything: weapons, sensors, and fuel within a stealthy body shape rules out the use of drop tanks. A sixth-generation fighter with 40 percent greater range would need to be physically larger to accommodate the extra fuel. While a bigger fighter isn’t ideal, giving fighters longer legs would allow air forces to distribute airpower over a wider area while still concentrating it when needed. Additional fuel would also give pilots more flexibility in how they approach targets, perhaps flying around known surface-to-air missile batteries on the ground instead of engaging them, and ambushing enemy fighters and support planes from unexpected directions.

Drones. Current research into high performance, subsonic drones will give fighter pilots the ability to assign important tasks to drones, sending them into dangerous situations instead of a manned aircraft. The U.S. Air Force’s “Loyal Wingman” concept means fighters will someday fly into action with a small fleet of drones, each outfitted to accomplish certain missions such as reconnaissance, electronic warfare, strike, and even air-to-air warfare. Low-cost and disposable, such drones will allow air forces to buy back numbers of airplanes overall while the cost of manned aircraft skyrockets.

In the future, a flight of sixth-generation fighters on a penetration mission could be accompanied by several drones. Some might search for enemy surface-to-air radars and destroy them with anti-radiation missiles, even loitering and waiting for careful radar operators to turn their radars back on. Others might broadcast powerful jamming signals, or impersonate the sixth-generation fighter on radar. If the mission is intercepted by enemy fighters, drones armed with air-to-air missiles could outflank the enemy or act as bait, drawing them into a trap laid by the manned fighters. Finally, other drones could act as flying magazines for the manned fighters, carrying even more precision-guided missiles to drop on enemy targets.

Artificial Intelligence. The abundance of sensor data from the pilot’s aircraft, nearby aircraft, ships, ground forces, satellites, and other sources of information will threaten to overwhelm pilots. The amount of data pilots will have to deal with in the future will only grow and never go away. Pilots have enough on their plate flying the plane, so an AI that could sift through the river of data, prioritize it, and present the relevant bits to the pilot would go a long way toward managing his or her workload.

A sixth-generation fighter AI could, for example, detect the emissions of a Russian “Cheese Board” radar system and recommend courses of action, including engagement or avoidance. It could keep tabs on drones flying alongside the sixth-generation fighter, monitoring fuel use, range, and weapons. It could recommend alternate landing sites for damaged aircraft, taking into consideration range, airfield condition and damage to the manned fighter, and make the necessary fuel and range calculations. It could even assign other less pressing data to other A.I.s to keep abreast of developments and bring it to the master AI—or pilot’s—attention as it grows in relevance to the mission.

There are many new emerging technologies that could make it onto the next generation of fighter jets. This tech: lasers, longer range, drones, and artificial intelligence will very likely define the sixth-generation fighter of the future. Other tech may come out of left field and quickly find a home on the fighter of 2035. Whatever the case, the next-generation fighter jet will feature decisive improvements over current-gen fighters, making air forces deadlier and more effective than ever before.