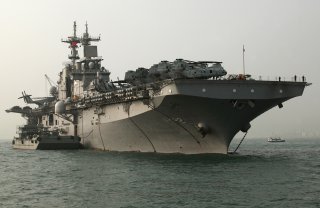 From a distance, the U.S. Navy’s Wasp-class amphibious assault ship USS Essex might have been mistaken for a World War II aircraft carrier as it sailed into Hawaii this week with vintage aircraft on its flight deck. Rather than carrying its F-35 stealth fighters, USS Essex carried a P-51 Mustang and notably a B-25 Mitchell bomber, the same type of aircraft used in the April 1942 Doolittle Raid over Tokyo.

The Navy isn’t going retro in its choice of aircraft of course but was delivering the World War II warbirds to Hawaii, where they’ll be used in events commemorating the seventy-fifth anniversary of the end of World War II. The airplanes will reportedly participate in three aerial parades, which are scheduled to take place on August 29, August 30 and September 2.

In addition to the B-25 and P-51, several other privately-owned aircraft hitched a ride on the amphibious assault ship including two Catalina flying boats, an F8F Bearcat fighter, an FM-2 Wildcat fighter, two Texan trainers and a Boeing-Stearman PT-17 biplane. All the aircraft were load by personnel at Naval Air Station North Island in San Diego at the end of last month using a crane.

It is worth noting that the U.S. Army Air Corps’ B-25s used in the Doolittle Raid were also loaded onto the USS Wasp (CVN-8) as the bombers were of course incapable of landing on a carrier deck. During World War II smaller Navy carriers were also used to deliver combat aircraft from the United States to destinations that were outside the range of the aircraft—and this primarily included distant islands in the Pacific theater.

U.S. warships have proudly hosted vintage aircraft to mark these important milestones in military history. In 1995, the Nimitz-class aircraft carrier USS Carl Vinson was also used to deliver several World War II warbirds to Hawaii for the fiftieth anniversary of the end of World War II.

While the aircraft were off-loaded with cranes from the USS Essex, in 1992 two B-25 Mitchell—named for U.S. military aviation pioneer General William “Billy” Mitchell—took off from the Forrestal-class aircraft carrier USS Ranger to commemorate the fiftieth anniversary of the famous Doolittle Raid.

During this trip, the USS Essex also reportedly carried a new C-12U Huron utility aircraft, the militarized version of the Beechcraft King Air, for delivery to the Hawaii Army National Guard. The amphibious assault ship typically operates with vertical take-off/landing (VTOL) aircraft such as the Marine Corps version of the F-35 Joint Strike Fighter, which of the three variants can carry the most internal fuel—nearly twenty thousand pounds—allowing for longer range flights.

During the recent trip, it still carried its Marine Corps MV-22 Osprey tilt-rotors and MH-60 Sea Hawk helicopters. The warship, with other Marines on board, was also heading to Hawaii to take part in the multinational Rim of the Pacific (RIMPAC) exercises, which are scheduled to begin next week. It is the world’s largest international maritime exercise and is designed to foster and sustain cooperative relationships, critical to ensuring the safety of sea lanes and security in support of a free and open Indo-Pacific region.