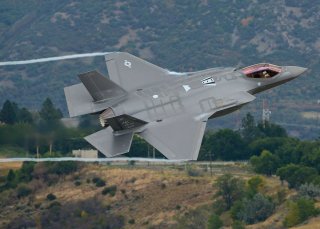 Although the number of state-of-the-art F-35 fighter jets is increasing rapidly, what impact will emerging technologies have on this one-of-a-kind stealth fighter?

The advent of sixth-generation aircraft and explosive growth in artificial intelligence has generated a technological climate in which breakthrough systems come to fruition on a much faster timetable. Innovative advanced computer simulations, digital engineering, and cyber-related information processing are quickly reshaping the landscape.

New sensors, weapons, information processing, and even new stealth configurations are likely to arrive faster than expected. The good news is that the creators of the F-35 were well ahead of the curve, and ready to meet those threats head-on.

Over the past decade, engineers working on the F-35 fighter jet have built a specific modernization plan into the stealth aircraft with a mind to keeping the jet cutting edge and hopefully superior well into the 2070s.

It is conceivable that many advances in the realm of stealth— such as thermal signature management, coating materials, or even various construction techniques—could be incorporated into an F-35’s airframe.

The basic configuration of the airframe may not necessarily need to change much in order for the aircraft to surge into new dimensions of technological capability.

Years ago, the Pentagon’s F-35 Joint Program Office outlined a “continuous development” roadmap for the F-35 fighter. This roadmap mapped out the integration of new technologies into the aircraft such as weapons and sensors. These technologies will be added as they become available.

This program, which was pioneered years ago, has yielded significant results, particularly in the realm of software. Former Air Force Acquisition Executive William Roper once told reporters that “software” may determine who “wins the next war.”

This pertains to information flow and management of otherwise disparate pools of accumulated sensor information. Software enhancements to the F-35 jet would allow it to fire new weapons.

For example, a software enhancement will give the jet a breakthrough ability to fire the Stormbreaker weapon, which is an air-dropped bomb capable of tracking targets in all types of weather and attacking at ranges up to forty miles away. The Stormbreaker uses a tri-mode seeker using millimeter wave, infrared or radiofrequency and laser targeting to track and destroy targets.

There are many weapons that benefit from a two-way data link that allows them to maneuver in flight. The Block III software drop similarly widen the weapons arsenal for the fighter jet.

Engineers are increasingly viewing software enhancements as something that needs to be pursued in more a continuous flow instead of separating them into small updates over the span of many years.

For example, integrating new software allows engineers to add new weapons to an aircraft, improve its data library and allow it to use new computer processing speeds.

A continuous modernization environment would contribute to a more capable war platform twenty to forty years from now. And that makes all the sense in the world.