F-35s vs. Missiles: Could Israel and Iran Be Headed Towards a War? 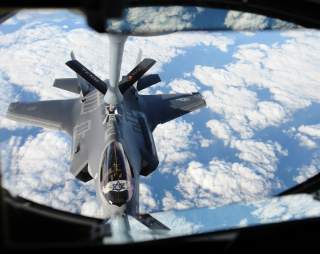 The Israeli Defense Forces shifted units to the West Bank and the Jordan valley in the week President Donald Trump unveiled the “Deal of the Century” peace plan that envisions a possible future Palestinian State. The U.S. decision comes prior to an Israeli election in March and saw Israeli Prime Minister Benjamin Netanyahu and opposition Blue and White party leader Benny Gantz arrive in Washington. After the announcement, Gantz returned to Israel and Netanyahu made a brief stop in Russia where an Israeli citizen had just been pardoned. Defense concerns in Israel relate primarily to the Iranian threat today, but the “Deal of the Century” adds a new element into the threat matrix.

The IDF said on January 28 that following the ongoing situation assessment “it has been decided to reinforce the Judea and Samaria and Gaza Divisions with additional troops.” In the three days following the announcement Palestinian groups in Gaza fired rockets and mortars into Israel. This included at least one projectile on Wednesday and several on Thursday aimed at Gaza border communities. On Friday mortars and two rockets were fired at Israel from Gaza.

Israel’s security situation at the end of 2019 was primarily dominated by concerns about Iran, including Iranian movement of precision-guided munitions to Hezbollah via Syria and Iranian entrenchment in Syria through its Islamic Revolutionary Guard Corps Quds Force. Israel was unveiling a second F-35 squadron and preparing to face a complex array of other Iranian threats that span a large potential battlefield from Iraq to Yemen. However, the U.S. killing of IRGC Quds Force commander General Qasem Soleimani and Kataib Hezbollah leader Abu Mahdi al-Muhandis on January 3 potentially changes Israel’s calculations.

The new Defense Minister in Jerusalem, Naftali Bennett has threatened to turn Syria into Iran’s Vietnam. With Muhandis out of the way the role of Kataib Hezbollah supporting Iran’s “land bridge” or corridor of influence in Iraq and Syria has likely shifted in the near-term. Soleimani’s death also may affect Quds Force operation in Iraq and Syria. Throughout 2019 Israel was concerned about the Quds Force. Head of the IDF’s Intelligence Directorate Maj. Gen. Tamir Heyman said in August 2019 that the Quds Force is continued its efforts to destabilize the region. “We are continuing effort to stop the Quds Force attempts to harm Israel.” Israel accused the Quds Force of firing rockets at Israel in January, September and November 2019. To counter the Iranian threat Israel has not only launched attacks on hundreds of IRGC targets in Syria but has also upgraded its air defenses.

Iran has elevated Mohammad Hejazi, formerly the IRGC’s representative in Lebanon involved in supplying precision guidance to Hezbollah, to be the deputy of the IRGC Quds Force in the wake of Soleimani’s death. This also may change the way the IRGC Quds Force seeks to threaten Israel. Israel’s Air Defense commander Brig. Gen. Ran Kochav argued in a January interview that the precision-guided munitions are a significant threat because Hezbollah wants to be able to hit any point in Israel within 10 meters. Kochav says Israel’s air defense David’s Sling system is designed to be able to confront precision missiles that come as part of a volley. In addition, Israel has upgraded its Iron Dome defense system to rapidly intercept lower level short-range targets. These two systems, along with Israel’s Arrow 3 and U.S. Patriots give Israel multi-layered air defense against everything from mortars to ballistic missiles. Kochav says Israel is also working on stopping rockets with lasers. Close cooperation with the U.S. on air defense issues is important to Israel, especially as Iran has showcased its ballistic missiles and use of drones and cruise missiles in recent attacks in Iraq and Saudi Arabia. Israel tested a new rocket propulsion system on January 31 for the second time in a month amid the rising tensions with Iran.

Iran is a complex threat to Israel because of its array of sophisticated weapons. In addition to a nuclear program, Tehran is constructing better UAVs, rockets and drones. It has an estimated 900 personnel in Syria and 30,000 Shi’ite militias that it backs in Syria. The precision-guided munitions Israel says Iran is transferring to Hezbollah and which Hezbollah wants to produce in Lebanon is another addition to the multiplicity of threat. Iran has allegedly moved ballistic missiles to Iraq in the fall of 2018 and 2019. With Iran momentarily distracted by tensions with the U.S. in Iraq, it is not clear if pro-Iranian groups might use the instability in Iraq to continue to transfer those munitions to areas that could be used against Israel. Across the border, in Syria, Iran wants to move air defenses to counteract Israel’s strikes. This could involve the 3rd Khordad system or other air defenses that would ostensibly reduce Israel’s ability to carry out airstrikes in Syria.

The change in Iran’s posture after the death of Soleimani and how Iran responds in Iraq and Syria is important to Israel. Iran’s rhetoric tends to oppose the US and Israel as if they are the same entity with Iran’s statements referring to itself as leading the “axis of resistance” against the US, Israel and some Arab state. The “resistance” in this case includes Hezbollah, pro-Iranian groups in Syria, the Popular Mobilization Units of Shi’ite militias in Iraq and Houthis in Yemen. Israel is looking at opportunities that could arise as a result of Soleimani being killed.

The main question raised by the “Deal of the Century” initiative is that all the Palestinian factions oppose the Trump plan and it has caused them to seek some kind of unified front. This was in contrast to the divisions between Hamas in the Gaza Strip and the Palestinian Authority president Mahmoud Abbas in Gaza last year. It also may change the division between Palestinian Islamic Jihad and Hamas. PIJ is supported by Iran and fought a short conflict with Israel in November last year. Hamas remained on the sidelines and Hamas and Israel has been quietly discussing a long-term ceasefire.

On January 2 reports indicated there was still a long way to go for any Hamas-Israel arrangement. Now the tense situation in Gaza, with rocket fire and retaliatory airstrikes by Israel may reduce the chances for a strategic ceasefire. Unsurprisingly Tehran would like to use the U.S. peace plan as an excuse to push Islamic Jihad to do more against Israel as Iran seeks to unite factions in Iraq against the US. During mass anti-American protests in Baghdad on January 24 both U.S. and Israeli flags were included on many posters. For Tehran linking the tensions in Iraq and Gaza in light of the peace plan push is a necessity to make its own role appear more relevant in Iraq, Gaza, Syria, and Lebanon. Israel understands this and must adjust accordingly in the coming months.