F1:This Weird Australian Machine Gun Was a Beast on the Battlefield 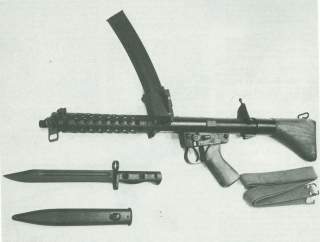 The Australian Army first issued the F1 submachine gun to its soldiers in April 1963 to replace the World War II-vintage Owen Gun.

Like the earlier Owen, the F1 had a top-mounted magazine — which lent itself to prone-firing and was more comfortable than more-conventional weapons were for troops to carry slung.

The F1 entered service alongside the Australian L1A1, and shared with that weapon a common trigger group and pistol grip as well as a butt plate, thus minimizing the additional unique parts the submachine gun required.

Australian Ordnance had begun searching for a replacement for the aging Owen Gun after the Korean War. The Owen had been quickly and cheaply produced during the World War II. It had been popular with Australian troops, but maintenance of the Owen Gun proved difficult — as each weapon had been hand-fitted to speed up production and some parts weren’t interchangeable.

The Army felt it could do better with a new design.

Industry proposed a number of new weapons, including one designated the “Kokoda,” presumably after the Kokoda Trail campaign that Australian troops fought in 1942.

The Kokoda was lighter than the Owen was but suffered from overheating problems. A series of designs designated the “X-Series” followed the Kokoda. In 1962, the X-3 — a product of the Lithgow Small Arms Factory — became the F1.

The F1 was a select-fire, blowback submachine gun with a non-reciprocating bolt handle. The bolt/cocking handle was on the left side of the receiver, its slot protected by a dust cover.

Chambered in nine-millimeter, the F1 fed from a 34-round curved magazine — although it could also take straight Owen magazines. The weapon’s ejection port was on the bottom of the receiver ahead of the trigger group.

Lithgow added a small piece of metal in front of the ejection port to prevent the operator from inadvertently moving his hand over the port.

The F1 had an in-line stock that fit into the rear of the tube receiver. The rear sight could fold against the receiver when not in use, while the front sight projected from the right side of the magazine housing rather than over the muzzle.

The F1 was compatible with both a spike bayonet — held integrally in the barrel shroud — or the standard L1A1 sword bayonet.

The F1 weighed just over seven pounds, was 28 inches long and boasted a cyclic rate of approximately 600 rounds per minute. It used a detachable solid butt stock, unlike the Sterling with its folding stock.

Lithgow produced 25,000 F1s for the Australian military between 1963 and 1972. The Owen and, later, F1s saw extensive service in Malaya and Vietnam in the hands of rear-echelon troops, armored-vehicle and aircraft crews and some infantry sections.

The F1 remained in Australian service alongside the L1A1 into the early 1990s, at which point the Steyr F88 replaced both weapons.