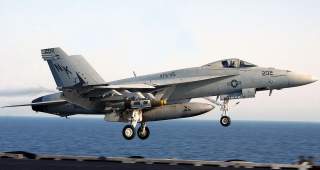 The F/A-18E/F Super Hornet has fully replaced the F/A-18A/C in U.S. Navy service, but it has not been as successful as an export. What’s holding it back?

In April 2018, the U.S. Navy officially retired the F/A-18C “Hornet” from combat service, marking the end of an era for the basic F/A-18A/B/C/D, which entered service in 1983. The aircraft will continue to serve in the U.S. military in the Blue Angels aerial demonstration team, the U.S. Marine Corps, and reserve squadrons in the Navy. The larger F/A-18E/F “Super Hornet” will serve as the primary carrier fighter for the U.S. Navy until the introduction of the F-35C.

(For simplicity's sake, the original Hornets, which include the F/A-18A, B, C, and D variants will be called "Hornet," and the larger F/A-18E and F will be called "Super Hornet" from this point on.)

While the U.S. Navy has retired the Hornet, it also will continue to serve in the (ground-based) air forces of many other nations, including Canada, Finland, and Kuwait. While it may not have matched the stellar export success of the F-16, the Hornet was fairly successful on the export market. Conversely, the larger Super Hornet has not been able to match the success of it’s older and lighter cousin, with only one successful export customer so far.

Why was the original Hornet so successful on the export market? Is the Super Hornet likely to be the aircraft of choice to replace the original in foreign services as it did for the U.S. Navy? Or have newer designs on the market made it harder to compete?

When the original Hornet came out in the 1980s, it came at an opportune time. Many air forces were operating older 1960s era aircraft and were looking to upgrade. While the F-16 Falcon snagged a lot of these customers, it was a single-engine craft.

Air forces that operated dual-engine fighters like the F-5 Tiger often were hesitant in switching to a single-engine plane, especially if they had to patrol over long distances such as in the cases of Canada and Australia. The Hornet also presented a modern dual-engine fighter with many of the same (or better) features compared to the F-16.

As such, the Hornet was adopted by many F-5 users: Canada, Spain, Switzerland, and Malaysia all operated F-5s, which were supplemented or replaced by the Hornet. Other countries such as Finland and Australia, for which the Hornet replaced single engined Drakens, MiGs, and Mirages, specifically cited the advantages given by the twin-engines in their adoption decision.

The Super Hornet retains all of these advantages and is a logical modernization to current Hornet operators. The cockpit layout remains largely the same, so retraining pilots is streamlined and easy. So why isn’t it more popular?

While the original Hornet might be outdated for the U.S. Navy, it’s still plenty up to date for most foreign customers. It can integrate most modern weapons: guided bombs, missiles, active-radar air-to-air missiles. As the Hornet was designed as a truly multirole fighter from the outset (as the F/A in the designation suggests), its radar is highly versatile and able to function in both air-to-air and air-to-ground modes.

Besides, the original Hornet still has plenty of room for upgrades. The latest trend in fighter radar is a move to AESA radars, and the U.S. Marine Corps is procuring such updates for its Hornets. With continued upgrades like that, the F/A-18 will remain relevant. Meanwhile, the Super Hornet has carried an AESA in U.S. Navy service since 2005.

The main area that the Hornet lacks in comparison to the Super Hornet is in engine power, range, and loadout. The Super Hornet carries two additional weapons pylons, allowing it to carry more bombs and missiles and truly take advantage of the increased range. But as a result, it’s slightly more sluggish in the air and in maneuvering.

In the end, the Hornet is likely to stick around because most countries don't need the increased capability in range and loadout the Super Hornet brings. While range and loadout might be a big deal when you're flying off a carrier as the U.S. Navy does, a country operating the jets from the ground has a less need for extended range: they can preposition their jets more permissively.

With an upgraded radar and integration with the latest weapons, the original Hornet is still one of the deadliest jets in the air today. For that reason, most countries probably don’t see the reason to perform the upgrade to the Super Hornet. The increase in capability in the areas the Super Hornet offers is not worth the cost of a new plane.