Fact Check: Does Trump Have the Most Successful Judicial Nomination Record Since George Washington? 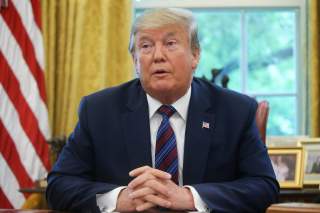 President Donald Trump has had what many would consider a successful record on judicial appointments—and has repeatedly cast that success in historical terms.

“We have many appeals court judges—many—that we’ll have appointed. The courts are a whole different thing,” Trump told a largely teenage audience gathered Tuesday in Washington, before giving them a quiz. “I will be up to 147, not including the two Supreme Court justices. Now, percentage-wise, I blow everybody away except one person. One person I’ll never beat. You know who the one person is?”

They had reason to say that. Trump has made the claim in at least four previous speeches.

He played along with the crowd at the Turning Point USA event, asking, “Who?”

But we’re going to have a tremendous percentage, and after six more years, it’ll go to a level that nobody will even be close.

He’ll never—that will be a record that will never be broken.

Previously, at the Faith & Freedom Coalition’s Road to Majority Conference in late June, Trump told the audience, when the number of nominees was slightly lower than today: “Federal judges—138—which is, percentage-wise, going to be a record. But the only one that has a record greater than mine, percentage-wise, is George Washington.”

Trump made a similar comment at an Orlando, Florida, rally earlier in June. He made similar assertions in April at a National Rifle Association event in Indianapolis, Indiana, and during a Kansas City, Missouri, event in December.

However, it doesn’t appear to be entirely factual, notwithstanding Trump’s naming more appeals court judges at this point in his first term than predecessors going back to at least President Jimmy Carter in the late 1970s, according to measurements by the Congressional Research Service and The Heritage Foundation.

Trump speaks about his record on federal judicial appointments as a whole and doesn’t make a distinction regarding nominees to the circuit courts of appeals versus district courts.

“The fact that he included that subject shows how important the judiciary is to the Republican—and, specifically, to the conservative—base,” said Thomas Jipping, deputy director of the Edwin Meese III Center for Legal and Judicial Studies at The Heritage Foundation, adding:

While he has so far appointed a smaller percentage of the judiciary than most previous presidents at this point, President Trump is on track to appoint more judges than Presidents [Barack] Obama or George W. Bush in their first term. This pace would also result in appointing a higher percentage of the judiciary than the historical average over two terms.

Washington oversaw the confirmation of 38 federal judges during his two terms in office while presiding over a much smaller country and appointing every federal judge, according to Ballotpedia.

But the judiciary has expanded and circuits have changed greatly since Washington’s presidency.

With regards to the raw number of confirmations, President Ronald Reagan had more than any other president, at 402 judges over eight years in office, according to federal court measurements dating back to President Franklin D. Roosevelt.

In modern times, Trump has made a total of 194 judicial nominations so far, with 128 confirmations, a 66% confirmation rate, according to The Heritage Foundation’s Judicial Appointment Tracker of presidents, as of July 17, in the third year of their first term.

At this point in his presidency, Obama made 143 nominations with a 62.2% confirmation rate. President George W. Bush made more judicial nominations than either at this point, 200, with a 69% confirmed.

Judicial confirmation fights for lower court judges had become far more partisan and contentious by the time of the George W. Bush administration.

However, as has been widely reported, Trump has aggressively filled circuit court seats. He made 46 appeals court nominations with 93.5% confirmed as of July 17, more than any of his five immediate predecessors, according to the Heritage Judicial Appointment Tracker.

George W. Bush comes closest with 42 nominees, 61.9% of whom were confirmed. The other presidents secured 30 or fewer confirmations. Only Reagan’s 22 nominees had a higher rate of confirmation than Trump, at 90.9%.

During his first two years, Trump had 30 appeals court judges and 53 district judges confirmed, according to the Congressional Research Service’s measure of circuit and district judge nominations and confirmations from 1977 to 2018.

Trump nominated more appeals court judges than any other president going back to Carter, according to the Congressional Research Service report, released in March.

George H.W. Bush got 22 appeals court nominations in 1989 and 1990. But Trump’s other five immediate predecessors had fewer than 20 circuit court confirmations.

Because the Supreme Court agrees to hear only about 80 cases per year, more than 90% of all cases are decided by appeals courts.

Trump has had more district court nominees confirmed in his first two years than Carter, George H.W. Bush, and Obama, but fewer than Reagan, Clinton, and George Bush, according to the Congressional Research Service.

The Congressional Research Service’s report found that Trump reached a 53.5% confirmation rate on his district and circuit court nominees over two years.

In two terms, Reagan had a success rate of 93.2%. In his one term, Carter, a president who got no Supreme Court appointments, had a 92.8% confirmation rate for his district and circuit court picks.

That said, it’s difficult to make an apples-to-apples comparison, said Curt Levey, president of the Committee for Justice, a conservative legal group.

“Sometimes the president is imprecise, but he has had exceptional progress with circuit court nominees,” Levey jokingly told The Daily Signal. “I’ve been discussing this stuff for 20 years, and there doesn’t seem to be an impartial standard for measuring this. That’s in part because courts have changed so much over time.”

He noted that the size of circuit courts change and that different circuits and lower court districts have been created over the history of the country.

Fred Lucas is the White House correspondent for The Daily Signal and co-host of "The Right Side of History" podcast. Lucas is also the author of “Tainted by Suspicion: The Secret Deals and Electoral Chaos of Disputed Presidential Elections.” Send an email to Fred.