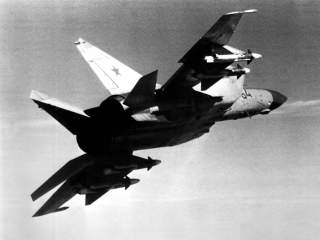 Algeria was the first export customer for MiG-25 (ASCC/NATO-code ‘Foxbat’). Related contract was signed in 1978, and a group of pilots and ground personnel underwent conversion training in Krasondar already during the same year. Thus, the first out of a total of eight MiG-25Ps, three MiG-25Rs and two MiG-25PUs were shown in the public already during celebrations for 25th anniversary of the Algerian revolution, on Nov. 1, 1979.

Algerian Foxbats never saw combat, but did take part in several ‘combat-like’ operations. In 1980s, they flew several reconnaissance and power-demonstration operations along the Spanish coast, and then over Morocco, and in 1988 flew CAPs during the PLO’s Congress in Algeria. MiG-25Rs also flew reconnaissance sorties during the war with Islamic extremists, starting as early as 1986.

The fleet should’ve been bolstered through addition of two batches. Details are scarce, but it seems that by 1997 up to 20 MIG-25PDS’, 6 MiG-25RB/RBShs, and at least one MiG-25PUs were acquired, most of which were upgraded to more advanced standard in Ukraine of mid-1990s, too.

The fleet is meanwhile quite dated, and thus it was expected that the remaining interceptors would be replaced by MiG-29SMTs and Sukhoi Su-30MKA and Su-30MKRs, in late 2000s. However, because of the scandal in which the MIG RSK delivered second-hand instead of newly-built MiG-29s, in 2007 (all of these were returned to Russia a year later), and because the Su-30 lacks the QRA capability, the 120th Squadron is still operational and keeping two MiG-25PDS’ each on alert at Bechar, Tindouf and Ouragla until today.

From time to time, they are taking part even in joint exercises with NATO-members.