FAIL: Nazi Saboteurs Tried to Attack America and It Was a Spectacular Failure 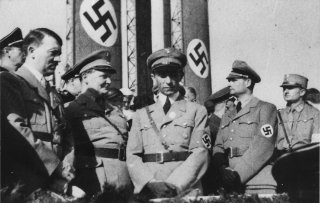 German spies during World War II hoped the operation would be the perfect mission—an intelligence and sabotage coup that would terrify Americans while destroying essential wartime industry.

Instead, Operation Pastorius turned into a fiasco with betrayals, astounding incompetence and blown covers from the very beginning.

But the incident created an American legal legacy that endures to this day. Two presidential administrations have justified the trial of enemy combatants during the war on terrorism based on a Supreme Court decision upholding military trials of the Nazi spies, instead of prosecuting them in civilian courts.

The details of Operation Pastorius—named after Francis Pastorius, founder of the first German settlement in North America—are straightforward. How the operation unfolded is a more convoluted story.

In 1942, Adm. Wilhelm Canaris, the head of the German Abwehr military intelligence agency, wanted clandestine operations that would insert Nazi agents into the United States.

“The Abwehr might have been many things, but they weren’t stupid,” Vince Houghton, historian and curator of the International Spy Museum in Washington, D.C., told War Is Boring.

“They understood that the only way the Allies win the war is behind the might of American industrial production,” Houghton added. “The German navy was already hard at work doing their part to disrupt shipments of war materials being sent to the front through the U-boat campaigns.

“German intelligence could supplement this with direct attacks on the sources of industrial production.”

There was precedent for the admiral’s decision. During World War I, Germany placed saboteurs in the New York-New Jersey industrial region, where they carried out successful attacks on arms factories.

One incident, the Black Tom Island attack in 1916, destroyed a pier and railroad freight cars piled with munitions bound for Great Britain. The explosion was so violent it killed seven people, broke windows 25 miles away and caused $20 million in damage.

The Nazis hoped they could score psychological victories against the U.S. through covert operations that might prompt workers to stay home out of fear. They also wanted to terrify the American Jewish population, Houghton said.

“Despite Pearl Harbor, Americans felt relatively safe—far removed from the fighting in Europe,” he said. “These attacks would be a way to bring the war to their doorstep.”

Canaris had two other assets on his side. He entrusted agent recruitment and training to Lt. Walter Kappe, a dedicated Abwehr officer and devoted Nazi party member who had lived in the United States for 12 years.

Kappe spoke fluent English, understood American culture and knew what he was looking for—agents who could pass as working class, blue-collar Americans who would find factory jobs and blend in.

That’s when he turned to the Ausland Institute, a Nazi organization that helped thousands of German-Americans return to the Fatherland during the 1930s. Eventually, eight agents who had once lived in the U.S. completed training that included the use of explosives, codes and multiple forms of sabotage.

The agents’ plans to disrupt the U.S. war effort included destroying aluminum plants and railways. They would spy on American industry with the goal of passing any technological intelligence they obtained back to their German handlers.

On June 12, 1942, German U-boats secretly landed two groups of saboteurs who rowed ashore in rubber rafts loaded with boxes of demolitions equipment, explosives and $175,000 each in American cash.

One group, led by Nazi agent George Dasch, landed at night near Amagansett, Long Island. The other group made landfall near Jacksonville, Florida.

After that, everything fell to pieces.

When he came ashore, Dasch encountered John Cullen, a member of a Coast Guard shore patrol. Cullen startled Dasch, who claimed he was a fisherman. Dasch threatened Cullen, shoved $260 into the startled beach patrolman’s hands as hush money and told him to forget what he saw.

Of course, Cullen immediately reported what had happened to his superiors, who dug up munitions the German agents buried after they came ashore. The discovery launched one of the biggest manhunts in FBI history.

Unnerved, disillusioned with the mission and determined to save his own skin, Dasch called the FBI using a payphone in an effort to communicate directly with bureau director J. Edgar Hoover. Eventually, he took a train to Washington, D.C., went to the FBI’s headquarters and convinced agents there he was no crank, but a genuine Nazi spy.

Soon, federal agents captured the remaining Nazi spies, who were living it up on the Fatherland’s dime rather than laying low.

Edward Kerling, the other team’s leader, immediately told an old friend about his secret mission. Herbert Haupt, another saboteur, visited his parents in Chicago, told them everything, bought a sports car with the cash provided by his German handlers and even proposed to his girlfriend.

Next, Haupt walked into an FBI office in an effort to talk his way out of failing to register for the draft.

On the executive orders of Pres. Franklin Roosevelt, a military commission tried the saboteurs—the first time the U.S. used a military trial to judge enemy combatants since the American Civil War.

One of the saboteurs, Richard Quirin, petitioned the U.S. Supreme Court, and argued the president exceeded his authority. Quirin wanted a regular trial in a civilian court under his Fifth and Sixth Amendment rights.

In Ex Parte Quirin, the high court unanimously ruled that the conspirators— as spies without uniform whose purpose was sabotage—violated the laws of war and were therefore unlawful enemy combatants.

Under the articles of war approved by Congress when the U.S. declared war on Germany, trial by military commission for unlawful enemy combatantswas constitutional.

Of the eight men, two received prison sentences and six were executed. Dasch and another saboteur who cooperated with the FBI received reduced sentences —and the U.S. deported both men to Germany in 1948.

But in recent years, the George W. Bush administration used Ex Parte Quirin to justify the use of military commissions to try suspected terrorists captured during the aftermath of the 9/11 attacks. Although Pres. Barack Obama has said that he’s uneasy with the commissions, his administration has never rejected their use outright.

As for the Abwehr’s ambitions, the German intelligence agency never again sent a sabotage team to the American homeland. The swift, public collapse of the mission and the execution of their agents were powerful deterrents.

More than 70 years later, Operation Pastorius might seem laughable. Yet, it was a daring move by German intelligence that made sense given the times, and came after Germany’s earlier successes with covert operations in the U.S. and Europe during World War I.

“The reality is much less lighthearted,” Houghton said. “If Pastorius had worked, it could have worked spectacularly. It could have legitimately knocked the U.S. out of the war if public support for the war diminished enough, or at least kept us chasing our tails long enough to knock the British out from lack of supplies.”

This article by Paul Huard originally appeared at War is Boring in 2015.