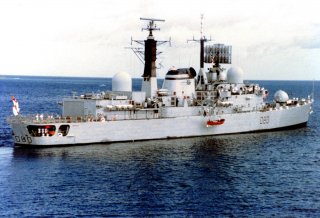 The reality is that the UK was not well equipped for this war. Both sides demonstrated incredible bravery, particularly considering that most were not trained for the specifics of this type of war. Both forces struggled and achieved, but time and space were certainly not on the side of the British. While the UK could have called on the United States for direct assistance, it should be noted that the U.S. Navy also had a deficiency in mine countermeasures at that time, which offers a tangential conversation regarding the strategic importance of retaking an otherwise insignificant set of islands at the risk of losing ships to mines.

Often enough, military capability must be reinforced by public support to win a war. How does the public react to ships sinking from weapons that wait quietly, patiently, and without the need to rest? Throughout Argentina, people clamored for the islands as an object of national pride, which could not be said for citizens in the UK. Argentina removed its navy from the conflict because it realized that after the war it still required a need to project power within its region. How much of the Royal Navy could be lost before its standing in Europe suffered? A Department of State’s Bureau of Intelligence and Research analyst noted that “the effectiveness of the fleet, far from its maintenance bases, will rapidly deteriorate after its arrival on station. [Thatcher's] damaged leadership could not survive a futile ‘voyage to nowhere.’”

Andrew Marshall was the director of the Office of Net Assessment. As Christian Brose recounts in his book, The Kill Chain, Marshall’s work led analysts to coin the term “anti-access and area denial” to quickly describe how a powerful adversary may counter the U.S. platform-centered approach to war. Argentina did not require sophisticated weapons systems to protect its country from strikes. Instead, mainland Argentina’s safety was secured through diplomatic assurances based upon protests from Chile, Uruguay, Brazil, and others in the European Community. Thus, the diplomatic umbrella ensured that all fighting would occur east of Argentina. In the Falklands, it would not be diplomacy, but rather military capability that acted to deny the UK Marines from landing to achieve victory. Argentina lacked sophisticated land-based anti-ship missiles and had limited air-launched anti-ship missiles. Their Air Force provided only one layer of capability, a layer that was not easily sustained and had limited on-station time. The presence of a layered defense anchored by naval mines could extend ranges of defense which would challenge or limit the UK’s ability to conduct offensive operations, which had the potential to change the outcome of the war. Naval mines could have been the anti-access and area-denial challenge for the UK just as they were for the United States at Wonsan.

A creative miner could look at the above chart and explain what could be done with the listed mines, then provide requirements for future mines based upon the capability of the British critical strengths; their center of gravity; and the associated critical capabilities, critical requirements, and critical vulnerabilities. Taking a moment to evolve the concept of mining to determine the desired effects and delivery to destroy or mitigate the enemy’s center of gravity, and, realizing that, in many cases, increasing a mine's operational depth buys space in the form of shape and distance, while improving effective range can reduce quantity requirements, the benefit of asking “what if” allows planners to consider how they would plan a minefield, exercise their creativity, and explore what the next set of tools should be. This is particularly important for those interested in mine countermeasures, so they may explore concepts beyond adversary doctrine to ensure that they are not surprised when the enemy departs from doctrine.

It is widely accepted that the Falkland’s War could have gone either way. While a robust mining effort may not have secured Argentinian victory, it certainly would have made a UK victory more painful. Their brave sailors would have accepted the challenge of clearing minefields regardless of the conditions they faced. Their valor should have been matched with the capability to overcome the problem. In the end, the Falkland’s War begs the question, are we making mines and mine countermeasure systems to achieve operational and tactical objects, are we seeking to improve the kill chain, or simply looking to improve the capability of systems we already possess?

Historically, mining is often used to defend ports or sea lines of communication in relatively shallow water. Focusing on enemy and allied critical strengths and weaknesses will naturally drive mine requirements. Requirements should be based upon an intimate understanding of mine warfare and the desired effects rather than seemingly arbitrary improvements. Ideally, this focus will provide the opportunity to explore new theories in mining and measures of effectiveness. To improve the interoperability between mine warfare and other warfare areas and increase the awareness of mine warfare’s operational art within a joint warfare context, we must invest wisely as we “prepare today for the mines of tomorrow.” The United States has both suffered and benefited from mines—in modern history more suffering than benefit. Today is a great time to ask, “what if” and double our efforts to ensure that trend changes.

Joshua Edwards, PhD, is an operations research analyst and a veteran submariner. He is an expert in maritime mining and enjoys exploring military history. Dr. Edwards is a published author in military and educational arenas.