A Fascinating History of Britain’s Weird but Useful Hospital Ship 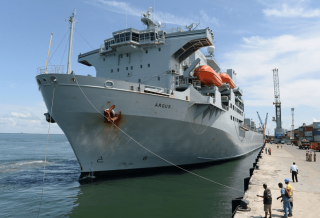 The Royal Navy’s weirdest warship is on her way across the Atlantic Ocean, bound for the British West Indies, where she will contribute her 100 patient beds to reinforce local hospitals straining to treat coronavirus patients.

Argus, a thirty-nine-year-old former merchant vessel, officially is a casualty-receiving ship. But with her large flight deck she also doubles as a training platform for helicopter pilots. The 574-feet-long vessel is part of the Royal Fleet Auxiliary.

Her past is as unusual as her layout. “Argus is an old lady with an interesting history,” former Royal Navy sailor Chris Sutton tweeted.

An Italian shipyard originally built Argus as Contender Bezant, a combined roll-on/roll-off and general-cargo container ship. That was back in 1981.

The Falklands War intervened the following year. “In 1982, she became one of the many STUFT (ships taken up from trade) due to the Falklands crisis,” Sutton tweeted. “She was rapidly fitted with a Chinook-capable flight deck and a limited version of the U.S. Arapaho containerized aircraft hangar/maintenance system.”

In other words, in 1982 Argus was a combination transport and helicopter-support platform. She lacked significant medical facilities.

Argus arrived in the Falklands in June 1982, a few days after the war had ended. A few months later the Royal Navy returned her to her original owners. But the owners laid her up, perhaps owing to the steep economic decline at the time.

The British defense ministry permanently purchased Argus in March 1984 at a cost of 18 million pounds. The ministry then spent 45 million pounds modifying Argus as a new aviation training ship to replace the aging RFA Engadine. The conversion took four years.

The conversion requires extensive work. “Her superstructure is built deliberately heavy (800 tons) and a further 1,800 tons of concrete poured into her upturned hatch covers to counteract the lost weight of cargo,” Sutton noted. “This improved her ‘empty’ seakeeping. The hold became a hangar and exhausts rerouted into a single funnel.”

She joined the fleet in 1988. Three years during the Gulf War, later she assumed her casualty-evacuation role. In 1993 and 1999 Argus supported NATO operations in Bosnia and Kosovo, functioning as a small helicopter-carrier.

But her small size and inefficient layout made it difficult to sustain intensive combat operations. Realizing this, the Royal Navy acquired the dedicated helicopter-carrier Ocean. Argus returned to her training and medical role.

In October 2014 Argus deployed to Sierra Leone in response to an outbreak of the ebola virus. She and her crew “undoubtedly saved many lives,” Sutton wrote.

Ironically, the tough little Argus outlasted the ship that was supposed to replace her. The Royal Navy sold Ocean to Brazil back in 2018.

Despite her usefulness and a recent upgrade, Argus is slated for decommissioning as early as 2024. “For almost 40 years, she’s quietly gone about her business with little public recognition and (it appears) little political impetus to replace her,” Sutton noted.