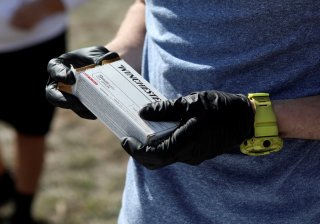 The three 9mm categories of ammunition that will be supplied to the FBI are Duty/Service (Micro), Training (Reduced Lead), and Frangible.

"As the world’s largest small caliber ammunition enterprise, Winchester has supported America's military, federal government, and law enforcement for more than a century," the company said in a statement. "It is an honor to carry on this legacy and continue to serve the brave men and women of the FBI via this award," the statement continued.

Last August, Winchester was awarded an exclusive five-year contract to provide the FBI with .308 Winchester loads. The $5 million contract was the first of its kind in the caliber and was awarded to support the FBI's sniper program. The Winchester load carries a 169-grain Sierra boat-tail hollow-point bullet and it was chosen after it passed the Bureau's examination process. Winchester was also selected because the FBI felt it offered the best overall value.

In December, Winchester, which is currently the largest manufacturer of small caliber ammunition for the U.S. military, was awarded a $13 million contract for the development of a 7.62-millimeter NATO cartridge for the U.S. Army.

In 2019, Olin Corporation's ammunition division, Olin Winchester, was selected by the Army to operate and manage the Lake City Army Ammunition Plant (LCAAP) under an $8 billion contract. In October 2020, following a one-year transition period, Winchester assumed full operational control of the plant.

The FBI also recently awarded contracts to Federal and Speer Ammunition for all four categories of its handgun ammunition contract. Three of the rounds will be manufactured at the company's Anoka, Minnesota, facility, while the fourth will be made in Lewiston, Idaho. Both companies are owned by Vista Outdoors.

According to Federal, the new award will keep 35,000 employees trained and ready for duty. Federal and Speer were the only brands to receive awards in all four ammunition categories—Service (full-size), Service (micro), Reduced-Lead Training, and Frangible. Federal and Speer were the primary winners for the training and frangible round contracts and also received secondary designations for the full-size and micro-service rounds.

"It is an honor that our brands continue to be selected for use by the most trusted law enforcement agency and value the products we make," said Federal's president Jason Vanderbrink. "The ongoing validation of the technology and performance found in every round of ammunition made by our highly skilled American workforce brings great pride to our company."

This Indefinite Delivery, Indefinite Quality contract was also reported to be a one-year base contract with the possibility of a four-year extension.

"We are excited to build the FBI the best bullets on the market for both duty and training,” said David Leis, Federal and Speer's vice president of Law Enforcement, Government, and International Sales. "This is a win for our engineering team as the FBI will be utilizing new as well as refined bullet technology in their firearms for both service and training," Leis continued.