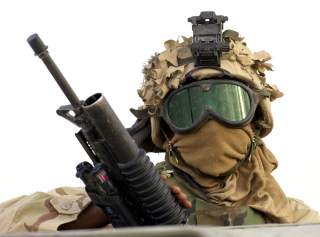 Key point: The military's new toy can fire a bigger and badder caliber of bullet.

One of the more interesting—and powerful—upgrades for the standard AR-15 rifle is an upper receiver in .458 SOCOM. Although nearly twice as wide as the .223/5.56 cartridge, .458 SOCOM can still fire from an AR-15 lower receiver and even use the same ammunition magazine. That’s no accident, as the cartridge was invented to give U.S. troops using the M-16 platform a major firepower boost. Unlike other heavy-caliber rifle rounds .458 SOCOM was not invented as a long-range round but rather a hard-hitting short range round.

The .458 SOCOM caliber was invented by Marty ter Weeme of Teppu Jutsu, LLC, after an informal discussion, reportedly held during a barbeque, with a member of the U.S. special operations community. The two discussed the reported performance of the M855 round for the M4 carbine and M16 rifle during the U.S. intervention in Somalia in early 1993, particularly during the battle between members of Task Force Ranger and militias controlled by Somali warlord Mohammed Farah Aidid. An article in the U.S. Army’s Infantry magazine says of M855 in Somalia, “...too often required multiple hits to neutralize an opponent, even though many Somali males were of slight build.”

.458 SOCOM was developed in 2000 as an upgrade for the standard M4/M16/AR-15 family of rifles. A rifle or carbine in .458 SOCOM differs only in the barrel and bolt, sharing all other common parts with a .223/5.56 rifle. While a gun owner can buy or build a rifle in the caliber, he or she can also simply buy or build an upper receiver in .458, swapping uppers to shoot the larger, more powerful ammunition. The conversion process typically takes thirty seconds or less.

As a result, a shooter can train with and shoot .223/5.56 ammunition and swap upper receivers only when necessary. This saves money and means the owner can shoot two very different calibers while only owning a single rifle/lower receiver. The larger ammo will even use .223/5.56 magazines, though a standard capacity thirty round magazine will only physically fit nine .458 rounds. A modified magazine follower is recommended to ensure reliability, another part than can be swapped out in a minute or less.

The .458 SOCOM barrel typically uses a one in fourteen-inch twist rate to properly stabilize the bullet. Teppo Jutsu recommends a barrel length of sixteen inches or less, and states that longer barrel lengths will do little to increase velocity and range. In most cases a longer barrel allows the pressure created by burning gunpowder to give a bullet extra push, but the developer states that complete powder burn with the stock 300-grain cartridge is achieved with just a 9.5 inch barrel.

The .458 SOCOM round is often compared to the 45-70 round favored by the U.S. Army and buffalo hunters in the 19th century. The caliber as the NRA’s Shooting Illustrated explains, “uses a lengthened .50 AE case with a rebated rim and is necked down for a .458-inch bullet.” A variety of loads are available in the 250 to 600-grain range. Even the lightest .458 SOCOM round is more than three times heavier than the M855 round. A 300-grain bullet will travel between 1,800 and 2,000 feet per second, while a 600-grain bullet will travel at 1000 feet per second—right about at the speed of sound, if not slightly slower. In general, the lighter rounds achieve a higher velocity, while the heavier rounds are slower.

The large round was invented specifically as a short-range man stopper. A .458 upper can transform a rifle from a .223/5.56 target and self-defense rifle to a big bore, big game rifle. A Hornady Interlock 300 grain round will hit with the force of approximately 2,300 foot-pounds at the muzzle, compared to 1,293 foot-pounds for the M855 5.56 round. The .458 bullet rapidly loses energy, however, dropping to 500 foot-pounds at 500 yards. Even at that range, the round will hit harder than a .45 ACP +P round from a 1911-style pistol.

The .458 round’s big, heavy bullet is designed for short-range engagements and rapidly loses velocity distance. The Hornady Interlock round goes transonic at about 200 yards, dipping below the speed of sound, at which point velocity loss accelerates. At two hundred yards the Hornady round drops about ten inches, and at the four hundred yard mark the round drops about 100 inches. At five hundred yards, the drop is more than 220 inches.

Another use for .458 SOCOM is as a hunting round. The sheer amount of energy delivered by the heavy round is adequate for all large North American game animals, from moose to elk to bear. The round is perfectly serviceable for wild pigs and deer but overkill for animals smaller than a hundred pounds. For smaller game, AR-15 owners with receivers in both calibers can simply switch back from .458 to .223/5.56.

The development of .458 SOCOM represents some of the best recent innovation in firearms, allowing millions of existing AR-15-type rifles to switch to a higher caliber by substituting just two of scores of parts. The sheer number of AR-15 rifles in the wild will probably keep .458 SOCOM a viable option for gun owners for years to come.

Kyle Mizokami is a defense and national-security writer based in San Francisco who has appeared in the Diplomat, Foreign Policy, War is Boring and the Daily Beast. In 2009 he cofounded the defense and security blog Japan Security Watch. You can follow him on Twitter: @KyleMizokami. This first appeared in November 2019.