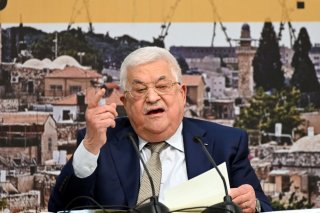 Like someone drowning, the Palestinian leadership in Ramallah is flailing about, barely keeping its head above water. Israel should throw Ramallah a life raft, but it must be careful not to allow itself to get pulled under.

At the early February meeting of the Palestinian Central Council (PCC), Palestinian leaders could barely keep track of the myriad challenges they face. This was the first meeting since 2018 of the PCC—a Palestine Liberation Organization (PLO) body that has assumed many of the responsibilities of the Palestinian parliament.

To its credit, the council took the opportunity to fill vacancies and reinvigorate the geriatric Palestinian leadership. Most notably, the PCC elected Hussein al-Sheikh, who is widely hailed as pragmatic and moderate, to be the next PLO secretary-general. This grants Sheikh an inside lane to succeed octogenarian President Mahmoud Abbas and inherit the herculean task of guiding the Palestinian national project out of its current malaise.

Since 2007, Sheikh has headed the Palestinian Authority (PA) General Authority of Civil Affairs. In this capacity, he has been one of the primary contacts with Israeli authorities regarding civilian matters in the West Bank. In January, Sheikh became the first Palestinian leader to meet with Israeli foreign minister Yair Lapid.

Also on the rise is Majed Faraj, who heads the PA’s General Intelligence Service. The two men are key players in Abbas’ innermost circle and accompany the Palestinian president on his diplomatic missions. Like Sheikh, Faraj has close working relationships abroad and helps guarantee West Bank security coordination, the most durable point of cooperation between the Israeli and Palestinian governments.

Unfortunately, this coordination is now in peril. At the same PCC meeting where a new generation of leaders were tapped to inherit the Palestinian government, the council called for a halt to security ties until Israel recognizes a Palestinian state.

Terminating security coordination would be disastrous. Israeli security officials estimate that in 2016 alone, such coordination resulted in the safe return of at least 300 Israelis who wandered into Palestinian territory. It has also prevented countless terrorist attacks on Israeli citizens.

Israeli-Palestinian security coordination is also indispensable for the PA. Without it, the Hamas terrorist organization could run rampant in the West Bank, a bloody prospect for the territory’s three million Palestinians. The PA has relied heavily on Israel to help maintain order ever since Hamas ousted Fatah from Gaza in their 2007 civil war. The Palestinians remain divided between the Hamas-ruled Gaza Strip and the Fatah-ruled West Bank. Hamas cells in the West Bank have stoked Fatah fears of being dislodged.

To make matters worse, as they prepare to inherit leadership positions, Sheikh and Faraj must now wade through a minefield in their own party. Their ascent comes at the expense of other likely successors to Abbas, namely Fatah Central Committee chief Jibril Rajoub and his deputy, Mahmoud al-Aloul, who might hold grudges and embrace even more extreme positions that could encumber pragmatic cooperation in the West Bank. Another challenge could come from Marwan Barghouti, a popular Fatah militant serving in Israeli jail for masterminding multiple terrorist attacks in the early 2000s.

Mohammed Dahlan, former Fatah strongman in Gaza, could pose a different challenge. He is backed by the United Arab Emirates and has established power bases in the West Bank—something Sheikh and Faraj lack. Dahlan recently received a further boost when he secured a million doses of Russia’s Sputnik V vaccine for Gaza. Faraj’s security forces have arrested and reportedly even killed Dahlan supporters in recent months, a sign of the perceived threat that Dahlan may pose.

Beyond the political wrangling, Sheikh and Faraj will need to distance themselves from the Palestinian public’s increasingly negative attitudes toward their government. A December 2021 poll found that 73 percent of respondents in the West Bank and 77 percent in Gaza demand Abbas’ resignation. The PA’s June 2021 killing of anti-corruption activist Nizar Banat further inflamed tensions, provoking rare demonstrations against PA brutality and corruption.

Unfortunately, the PA can no longer rely on political leadership or largesse from regional Arab states. In 2020, Arab donations to the PA decreased by 85 percent. In 2021, the United Nations estimated that the PA would have an $800 million budget deficit, describing the situation as “dire.”

To counteract Palestinian instability, even amidst Palestinian threats to cut coordination, Israel has extended several goodwill measures to help the PA. In early January, Sheikh and Lapid worked together to approve the citizenship status of thousands of Palestinians. Abbas and Israeli defense minister Benny Gantz hammered out a number of economic issues, such as legalizing the status of 9,500 undocumented Palestinians, authorizing the construction of 900 Palestinian homes in the West Bank, and disbursing $192 million to offset Ramallah’s loss of foreign aid.

Israel does not want to see a failed state on its border. That is why Israel is working overtime, security concerns notwithstanding, to support rising pragmatic leaders such as Sheikh and Faraj. These are measures that Israel must continue to take, while considering others. However, whether Israeli efforts can actually help sustain the West Bank’s flailing government remains to be seen.

David May (@DavidSamuelMay) is a senior research analyst at the Foundation for Defense of Democracies, where Abdel Abdelrahman is an intern. Follow FDD on Twitter @FDD. FDD is a Washington, DC-based, nonpartisan research institute focusing on national security and foreign policy.