Fighter Fiasco: The Navy's Version of the Stealth F-35 Is In Trouble 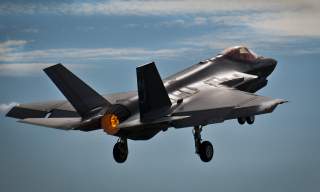 In February, the commander of the U.S. Naval Air Forces proclaimed that the Navy's F-35C Joint Strike Fighter was "ready for operations, ready for combat and ready to win" — even though the Navy's own testing data says otherwise.

Testing data obtained by the Project On Government Oversight (POGO) indicates that the F-35 variant's "fully mission capable" rate — a key measure of an military aircraft's readiness — collapsed from 12% in October 2016 to zero in December 2017 before remaining flat through 2018.

Both of these rates are far below the September 2019 target of an 80% mission capable rate for both Navy and Air Force fighter jets by set by former Defense Secretary James Mattis back in October.

These shortcomings come weeks after an annual report from the Pentagon's operational testing and evaluation arm highlighted the alarmingly low service life of the F-35B that "may be as low as 2,100 [hours]," well bellow the expected service life of 8,000 hours.

According to POGO, these readiness shortfalls dramatically reduce the availability of aircraft and, in turn, the next-generation's overall effectiveness downrange. From the report:

To tell how many planes can actually get to the fight requires a second measure, the sortie generation rate: that is, how many flights per day each fighter in the fleet completes. The 2018 DOT&E report makes no mention of it.

The fleet-wide sortie rates for the three F-35 variants POGO calculated from the 2017 report were extremely low, averaging between 0.3 and 0.4 sorties per day. During Operation Desert Storm, frontline combat aircraft including the F-15 and F-16 flew an average of at least one sortie per day, and the A-10 fleet averaged at least 1.4 sorties per day. Even under the pressure of recent Middle East combat deployment, the F-35's rates have not improved. According to statements from the squadron commander, 6 F-35Bs onboard the USS Essex flew over 100 sorties in 50-plus days in the Middle East. In other words, each F-35B flew a third of a sortie per day—meaning they flew an average of once every three days—in sustained combat.

And in February, the Navy declared its F-35Cs assigned to the Strike Fighter Squadron (VFA) 147 had achieved initial operational capability and were ready to deploy.

"We will continue to learn and improve ways to maintain and sustain F-35C as we prepare for first deployment," Joint Strike Fighter Wing commodore Capt. Max McCoy said at the time. "The addition of F-35C to existing Carrier Air Wing capability ensures that we can fight and win in contested battlespace now and well into the future."