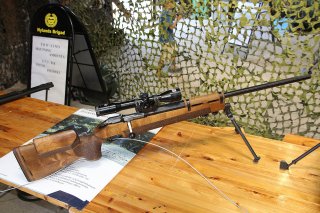 The Finnish Defence Forces Logistic Command has greenlit a new rifle for its infantry forces.

Finland Defence Minister Antti Kaikkonen approved the adoption of the new semi-automatic Sniper Rifle 23 and the Designated Marksman Rifle 23, which will be employed as a section support weapon.

The Sniper Rifle 23 reportedly has an effective range of eight hundred meters, while the Designated Marksman Rifle 23 has a range of six hundred meters. Each is based on the AR-10/AR-15 semi-automatic rifle platform, and will be chambered in 7.62mm. Both rifles will be produced by the Finnish-based Sako, and will replace the Soviet/Russian SVD Dragunov and the Finnish-made Tkiv.

The Tkiv 85 was based on the Russian-designed Mosin Nagant, and was first adopted in 1984. Some models even used original antique receivers and other parts dating to the 1890s, making it the oldest rifle in current use by any military. The Tkiv was also unique in that it was chambered for Finland's proprietary 7.62x53mmR cartridge, but it could still be used with the Russian-designed 7.62x54mmR in an "emergency situation."

Sako and the Finnish Defence Forces signed a letter of intent in May 2020 regarding the research and development of a new family of military rifles to replace both the Tkiv 85 and the Dragunov.

New Rifles for A New Year

"The new rifle system to be procured for the infantry increases the usability of snipers as well as the precision and range of infantry sections," the Finnish Defence Forces Logistics Command stated on its website.

"The rifle procurement is included in the Land Defence Development Programme, and it is part of the capability development of the Army's operational forces and local units," explained Col. Rainer Peltoniemi, inspector of infantry for the Finnish Defence Forces. "This project builds a completely new capability, and replaces most of the old 7.62 Sniper Rifle (Tkiv) 85s currently in service."

Sako will reportedly provide accessories, spare parts, maintenance equipment, and training for both the Sniper Rifle 23 and the Designated Marksman Rifle 23. The total value of the contract has not been disclosed, but it was announced that the first batch of new rifles will arrive with the Finnish Army by the end of 2022. Rifle system training is due to begin in 2023.

Sako was founded in 1919 just two years after Finland declared its independence from the Russian Empire. It first opened in a former Helsinki brewery to repair private arms and to recondition Russian military rifles for service with the new Finnish Army. Sako is now owned by the Italian firearm holding company Beretta Holding.