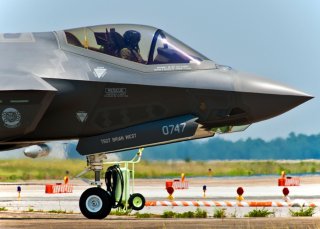 The F-35 Joint Strike Fighter is coming to Russia’s doorstep in a development likely to greatly expand and strengthen the U.S., European, and NATO deterrence posture on the continent.

Finland has signed a reportedly $11 billion deal to purchase sixty-four F-35 fighter jets, joining Switzerland, Italy, Norway, Denmark, the Netherlands, the United Kingdom, and Poland as the latest country planning to acquire the stealth fighter. This line-up of nations introduces a formidable, combined fleet of networked fifth-generation aircraft sufficiently positioned to achieve air superiority in any kind of great power air engagement on the European continent.

The presence of large numbers of F-35s, capable of dispersed yet closely networked and interconnected operations, greatly expands any operational envelope for European air operations. An international fleet of F-35s will not only bring advanced allied air force capabilities, but offer vastly increased information sharing; drone-like intelligence, surveillance, and reconnaissance capabilities; and secure networking between F-35s flying from different nations via a Multifunction Advanced Data Link (MADL). These technological capabilities are further enhanced by the F-35’s onboard computing power, which can quickly process, organize and transmit key items of relevance from otherwise disparate pools of information.

For example, if a Finnish F-35 were to use its long-range sensors to locate a group of approaching enemy fighters, drones, bombers, or even groups of advancing ground troops moving to close in for attack, F-35s from other member-nations would be notified and could support any operations.

The ability to instantly share time-sensitive data across disaggregated formations can offer a significant combat advantage in an attack area of operation. There is also a firepower dynamic, as F-35s can operate in closer proximity over target areas without needing to refuel or carry additional ordnance. For instance, if a Finnish F-35s operating in close proximity to Russian threats were to collect navigational, targeting, and mission specifics, that data could be picked up by F-35s in member-nations like Poland or Switzerland, which could lend aid.

There is also a substantial basing advantage. As larger numbers of U.S. and allied F-35 fighters are produced and delivered to allied nations, greater numbers bases in strategically advantageous positions such as in Poland, Finland or Switzerland—areas well within striking distance of the Russian border—will become available.