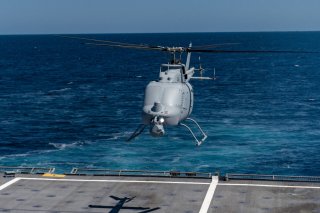 As the MQ-8B Fire Scout drone flies into the sunset after many years of successful missions, the U.S. Navy and its industry partners are sharpening their focus and expanding the mission scope for its larger and more-capable successor: the MQ-8C Fire Scout variant.

Engineered with a wide range of expanded technologies, the C model leverages an unmanned Bell 407 helicopter frame to deploy a larger, massively upgraded vertical-take-off-and-landing maritime drone. Part of this transition pertains to an interesting and impactful shift away from the Littoral Combat Ship (LCS), given the service’s plans to decommission as many as eight to ten LCS ships, according to its 2023 budget request. The rationale, as Navy Secretary Carlos Del Toro explained to Congress, is based upon a service assessment that the LCS simply could not compete against a highly advanced Russian or Chinese naval threat.

Del Toro cited a specific need to track and destroy enemy submarines as central to the service’s decision, given the challenges that have been associated with the LCS’s anti-submarine warfare modules.

“The particular problem we are facing on the eight we plan to decommission is the problems with the new ASW (Anti-Submarine Warfare) modules on these ships. The ships were designed to meet a different threat and it will be challenging for these ships to contribute to the high-end fight,” Del Toro told the House Appropriations Committee earlier this year.

At the same time, the U.S. Navy is accelerating the development of a new fleet of air, surface, and undersea drones, while also expanding the technical capacity and mission scope of existing drones. More specifically, this means the Fire Scout C variant is already applying its advanced technologies in support of major maritime warfare missions beyond those envisioned for an LCS. Adding more drones, command and control technologies, and air assets to amphibious transport docs, such as the Fire Scout, would seem to align with this concept as the U.S. Navy prepares for more separated, yet connected fleet operations. A Fire Scout could launch from a landing platform dock (LPD) and potentially relay images, video feeds, or intelligence information to a nearby amphibious transport dock or other ships involved in an integrated mission.

“We’re getting a lot of positive feedback on how the MQ-8Cs are operating. With the LCS decommissioning beginning, the Navy is trying to find additional ship classes, as well as potential land base expeditionary advanced base opportunities for the Fire Scout,” Lance Eischeid, director, Fire Scout program, Northrop Grumman, told The National Interest in an interview.