A Fireball: This U.S. Navy Submarine Was On Fire Underwater 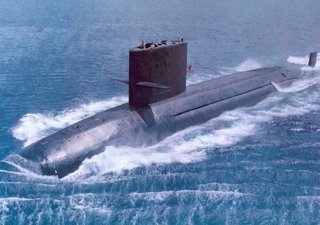 On the afternoon of April 24, 1988, all was not well in the USS Bonefish—amongst the last remaining diesel-electric submarines in the U.S. Navy.

The crew frantically blasted CO2 fire extinguishers to cool the overheating battery but the flames continued to grow and light smoke began wafting across the submarine began surfacing to periscope depth. Nine minutes later Bonefish’s skipper ordered the hatches to the battery compartment sealed, hoping to starve the flames.

But even as damage control crews struggled to comply, there was an explosion and a fireball coursed across the compartment, blasting sailors against the wall. In moments, jet black smoke poured across the ship, blinding the crew and making breathing poison.

Bonefish was on fire from the inside out—and she was still underwater.

The U.S. Navy has not lost a single submarine to an accident at sea in over fifty years despite operating one of the largest underwater fleets on the planet—not since implementing safety reforms after losing Thresher in 1963 and the Scorpion in 1968.

To be sure there have been bumps along the way—quite literally, given multiple collisions with Russian submarines, a Japanese fishing ship, and the seafloor. But the fire onboard the Bonefish remains arguably the most important asterisk to the Navy’s impressive submarine safety record.

Bonefish was one of three Barbel-class submarines commissioned in 1959, incorporating new design features such as a sleek tear-drops-shaped hull and a consolidated layout situating the command and fire control centers under the bridge/conning tower.

But unlike nuclear-powered peers then beginning to enter service, the Barbels were constrained by the life of their 506 lead-acid battery cells. A Barbel could last just over four days underwater creeping at 3 knots (ie. walking speed) but that same battery would only last just 90 minutes at a flank speed of 18.5 knots. After that, they needed to risk detection by surfacing or snorkeling and running their diesel engines to recharge their batteries.

Serving most of her career in the Pacific Ocean, Bonefish crossed the Panama canal in 1982 and joined the Atlantic fleet. By 1988 the aging submarine was bedeviled by increasing mechanical problems, but her last operational skipper Mike Wilson lobbied for two months of additional maintenance to try to address them. Unfortunately, several seemingly minor long-running problems were either accepted or went undetected—and these combined in tragic fashion while Bonefish was submerged.

At roughly 3:40 PM on April 24, however, Bonefish had just completed recharging her batteries when her engineers noticed one of her batteries had grounded—but couldn’t determine which due to an operator error. Captain Wilson decided at 4 PM to proceed with a programmed dive to 150 feet while the engineers got to the bottom of a seemingly ordinary problem.

Twenty minutes later Bonefish’s crew figured out which battery was the source of the grounding issue at the same time as leaking seawater was detected.

The flooding was later traced back to a leaky seal in the Bonefish’s Trash Disposal Unit used to eject waste into the water, as detailed in the Navy’s investigation. The leak allowed saltwater to gradually build up. When the Carr dove, the change in pitch allowed saltwater to flood across the ship, corroding the joint where battery cables penetrated the deck.

The interaction between the saltwater and the exposed electrical cables ultimately led to the overheating and explosion of the forward battery well as described at the beginning of the article.

The explosion at 4:39 PM cast a dense fog of choking smoke into the submarine’s command center. Wilson ordered emergency surfacing. The safety procedure, now essential for survival, was to don an Emergency Air Breather (EAB)—an enclosed face mask with an air hose that could be hastily plugged into fittings across the ship as pictured here.

But Lt. Ray Evert, the Officer On Deck, didn’t put on his EAB. According to fellow crewmember William Baker, Everts was likely dead set on one thing: verifying on the periscope that Bonefish was clear to surface so she didn’t accidentally collide with the Carr nearby. And the EAB would have impaired his vision while doing so.

Fortunately, the coast was clear, and Bonefish surfaced at 4:41. Everts then climbed up to the bridge, opening the lower hatch, and then attempted to open the upper hatch to the surface. But new to Bonefish, he wasn’t aware that the hatch suffered from a defect in her lugs, long reported but ignored, and required a reverse quarter-turn to open.

Unable to open the hatch, Everts climbed back down and collapsed on the command center’s floor, whereupon Wilson noticed and placed an EAB on his face. Another lieutenant managed to pop open the hatch.

With Bonefish surfaced and her bridge hatch open, the crew now sought to ventilate the vessel by running the diesel engines to clear the smoke, hopefully making it possible to fight the fire. The maneuver succeeded in temporarily clearing smoke from the control room but not the remainder of the vessel.

Hearing the fire in the battery well was out of control and that submarine’s #3 diesel engine had quit when activated, Wilson finally gave the order to abandon ship.

Personnel began pouring out of Bonefish’s hatches in the torpedo room (where most personnel had evacuated), bridge, mid-ship, and engine room. But two incapacitated crew members proved impossible to remove. Sailors tried repeatedly to hoist Lt. Everts out the bridge hatch but were finally forced to as smoke pervaded the submarine.

Radioman First Class Robert Bordelon passed out as well, and his fellows were unable to pull him up the bridge hatch. A third, Yeoman Third Class Marshal Lindgren became disoriented and remained behind in the submarine.

On the submarine’s slippery deck, the crew struggled to keep their balance and several fell overboard. Fortunately, the frigate Carr moved aggressively to coordinate a rescue effort, including deploying rescue rafts—only to promptly lose several as they were faulty and simply sank.

A Sea King helicopter from the carrier Kennedy piloted by Lt. Cdr. Waickiwicz extracted more than twenty crewmembers over three hours using a rescue hoist despite dangerous flying conditions, at one point refusing an order to withdraw. According to helicopter crewman Jim Chapman, the hoist was even lowered inside one of Bonefish’s hatches to pry out a heavyset sailor stuck inside.

A pararescueman named Larry Grossman also jumped down and remained in the water for hours assisting with the rescue despite enduring personal harm from spilled fuel and chemicals.

Altogether, eighty-nine of the ninety-two crew aboard Bonefish were saved. Aboard the Carr they were treated to donated clothing and a warm meal as they recovered from the ordeal. Fourteen sailors with serious injuries were later air-evacuated to the carrier Kennedy for treatment

Bonefish was not technically destroyed by the fire—but she was effectively done. Towed back to Charleston by the aptly named USS Hoist, she was decommissioned five months later and scrapped.

Fortunately, most of Bonefish’s crew miraculously escaped the calamity with their lives—but that doesn’t lessen the tragedy of the three crew members who were not so fortunate.

Readers interested in this incident would be well-served by reading the Navy’s report investigating the incident, as well as personal accounts shared by Bonefish’s crew, including her executive officer.