First Batch of Russia's T-14 Armata Tanks to Be Deployed 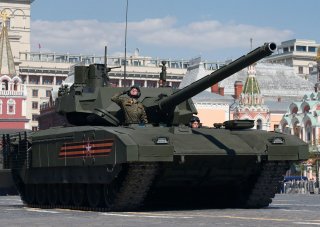 It is said that good things come to those who wait—but it is yet to be seen if this actually holds true for the Russian military, which is set to finally receive the latest T-14 Armata tank.

“The first batch of vehicles will be delivered to the troops shortly,” Alexander Potapov, CEO of Uralvagonzavod, the defense manufacturer that is part of the state tech corporation Rostec, told Tass on Monday.

Russian Industry and Trade Minister Denis Manturov had previously said in an interview with the Zvezda TV Channel that the T-14 Armata would be accepted for service in the Russian Army by the end of this year or early next year. However, delivery of the tank has been delayed in part due to the cost to produce the vehicle, since Russia was forced to reduce defense spending as a result of lower oil prices earlier this year.

The T-14 Armata has been of great interest to both the Russian Army and foreign customers, and last month Russian state arms seller Rosoboron Export announced that the T-14 along with the T-15 infantry vehicle could be demonstrated to potential foreign buyers at the Army-2020 international arms show.

Foreign sales could remain crucial for Russia as the tanks cost upwards of $4 million apiece, and as a result, initial plans by Moscow to buy 2,300 of the T-14s by 2025 were pared down significantly. Unless Russia can find foreign customers to help offset the costs, the T-14 could be simply too expensive for the Russian Army.

Work on the Armata project began in 2010 when the Russian Ministry of Defense terminated work on “Object-195”—the T-95 program. The entire project hoped to be a huge technological leap from Soviet-era military hardware designs and from the ground up the T-14 is very much distinct from past Soviet/Russian tank platforms.

The T-14 tank is based on the Armata platform and was shown to the public for the first time during the Victory Day parade in Red Square on May 9, 2015. The Armata is a heavy tracked standardized platform that serves as the basis for variants such as a main battle tank, an infantry fighting vehicle and an armored personnel carrier. It features fully digitalized equipment, an unmanned turret and an isolated armored capsule for the crew—which can control the turret and main gun remotely.

However, even with its advanced technology, the T-14 has largely underperformed to date. One was reportedly even destroyed in Syria earlier this year when it engaged “terrorists” who were armed with a rather low-tech TOW-2B anti-tank weapon.

Russia has continued to upgrade the T-14 as well, and last month there were reports that an unmanned version of the tank was in the works while the remotely-controlled 125mm 2A82-1M smoothbore main gun could be upgraded along with the turret to a 152mm gun. Russia has even explored the possibility of arming the tank with a hypersonic missile system.

All of those improvements could make for an even more formidable weapon—but the biggest threat to Russia’s tank is likely going to remain the cost to build them.