Five Dead After Volcanic Eruption; 'No Signs of Life' 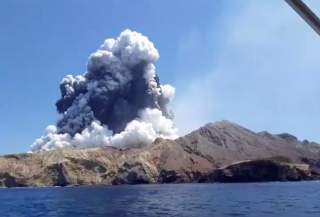 At least five people are dead and many others missing after a volcano erupted on an island Monday in New Zealand.

The eruption occurred on White Island and released clouds of ash about 12,000 feet into the air, according to The Washington Post. All of the missing are feared to be dead, police said. The numbers of those missing could be in the “double digits,” Deputy Commissioner John Tims said during a news conference.

My god, White Island volcano in New Zealand erupted today for first time since 2001. My family and I had gotten off it 20 minutes before, were waiting at our boat about to leave when we saw it. Boat ride home tending to people our boat rescued was indescribable. #whiteisland pic.twitter.com/QJwWi12Tvt

“No signs of life have been seen at any point,” New Zealand Police said, according to a statement. “Police believe that anyone who could have been taken from the island alive was rescued at the time of the evacuation. Based on the information we have, we do not believe there are any survivors on the island.”

Police can confirm five people are now confirmed to have died in the White Island volcanic eruption.

Our sincere condolences are with their family and friends.

A number of people have been injured and taken to hospital.

Search efforts were halted overnight because experts decided the island was not stable. The island is not inhabited, but it is a popular tourist destination. Both New Zealand citizens and tourists were visiting at the time of the eruption, Prime Minister Jacinda Ardern said, according to WaPo.

Twenty-three people near or on the island at the time of the eruption were rescued and some suffered serious burns. Up to 50 people are believed to have been on the island when it erupted, BBC reported.

White Island volcano last erupted in 2016, but no one was hurt.