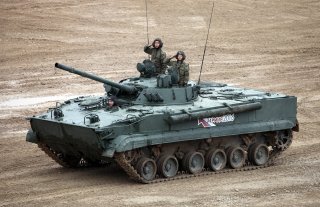 As the Donbass Conflict enters a new escalatory stage, the specter of open military confrontation between Russia and Ukraine looms larger than ever. Here are five of the notable weapons that Russia could employ in a major conventional war with Ukraine.

This article presumes for the sake of coherence that the only two belligerents will be Russia and Ukraine, but any such war bears clear prospects for an international intervention that could drastically change the course of battle.

Unlike Moscow’s great-power competitors, Ukraine’s Armed Forces lack the stealth and deep-penetration capabilities to overcome Russia’s layers of sophisticated missile defenses. In particular, Crimea-based units of Russia’s flagship S-400 Triumf missile defense system pose a grave threat to military assets in eastern and central Ukraine. “The S-400 air-defense systems can hit any aerial targets in the central part of Ukraine. All this is a serious threat for us,” Secretary of the National Security and Defense Council of Ukraine Oleksandr Turchynov previously told local media. Equipped with a powerful radar suite and diverse array of missiles, the S-400 can target manned aircraft, drones, cruise missiles, and ballistic missiles at a range of up to 400 km.

Kiev’s small, backward, and partly decrepit roster of MiG-29, Su-24, Su-25, and Su-27 fighters cannot successfully contest Ukrainian airspace in a major conventional war with Russia. Not only will they be unable to operate effectively in light of Russian air defenses, but they are vastly outmatched by Russia’s qualitatively and quantitatively superior air force. Advanced Russian fighters, including the formidable Su-35S, handily outperform Ukrainian military aircraft and are capable of staging devastating precision ground strikes against key Ukrainian military and political infrastructure with a wide array of air-to-surface missiles (ASM’s) and guided bombs.

Despite the partly urban nature of this prospective conflict, main battle tanks (MBTs) will undoubtedly play a role in the war’s larger pitched battles. Not only do Russia’s Ground Forces operate the world’s largest tank army at 13,000 units, but its latest MBTs offer a slew of modern upgrades that make them a force to be reckoned with. Ukraine’s T-84 Oplot-M MBT is a formidable machine in its own right, but likely has not been produced in sufficient quantities to effectively resist Russia’s capable T-90A tank and its modernized T-90M variant. Russian T-90 tanks have allegedly already been spotted, and reportedly inflicted heavy losses, on Ukrainian troops in the Donbass region.

The ongoing Donbass War has been marked by recurring artillery exchanges between the Ukrainian military and Russian-backed separatist forces. That trend would almost certainly bleed over into a full-scale war between Russia and Ukraine, with Moscow having moved trainloads of 2S19 Msta-S modernized 152.4 mm self-propelled howitzers to Crimea in recent days. Capable of carrying fifty rounds, boasting a sustained rate of fire of around seven to eight rounds per minute, and packed with fairly advanced targeting technology, these heavy howitzers can cover large parts of Ukraine. Given Russia’s overwhelming air supremacy and sophisticated missile defenses, Ukrainian forces will struggle to effectively contain the threat from these systems.