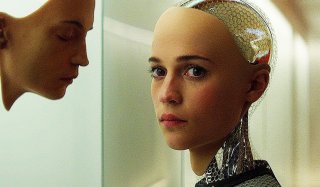 The English writer/director Alex Garland has gained a reputation as the maker of visually stunning sci-fi with big ideas at the center. This was the case with his acclaimed 2018 film Annihilation, and also his miniseries Devs, which is about to wrap up its run on Hulu with Garland writing and directing the entire series.

Garland was originally a novelist, and his novel The Beach was made into a movie of the same name with Leonardo DiCaprio. Garland didn't have anything to do with the movie, but its director, Danny Boyle, later directed two films based on Garland's screenplays, 28 Days Later and Sunshine. Garland made his directorial debut with 2015's Ex Machina, which arrived in theaters five years ago today.

The film, which is available to stream on Netflix, is quintessential Garland: It plays with ideas about futuristic technology, in a way that combines gorgeous images with an overarching vibe that's deeply creepy.

The focus of Ex Machina's unsettling futuristic sci-fi is robots, artificial intelligence, and big tech companies amassing having amassed more power than they probably should.

Domhnall Gleeson plays Caleb, a low-level programmer who works at Blue Book, a Google-like tech giant, which holds a dominant position in the search space but has its hands in much more.

In Ex Machina's first scene, Caleb wins a contest, and the two coworkers who briefly congratulate him are the only human female characters who will appear in the entire film. The contest entails a helicopter trip to a secluded mansion run by the chief executive Nathan (Oscar Isaac, looking about 25% more muscular than he typically does, even though his character is supposed to be an alcoholic.)

It turns out Caleb is there to conduct a Turing test, with an AI-equipped robot Nathan has built named Ava (Alicia Vikander.) The two get to know one another, and big questions are raised about the ethics of AI, surveillance, data mining, and other technology issues that have become even more hot button in the culture in the five years since the movie came out.

The performances by the three leads are all typically strong. Gleeson and Isaac, of course, are both actors who appeared in the Star Wars sequels, while Vikander nails the not-easy energy that comes with playing a robot. Also on board is the very talented Sonoya Mizuno - who plays one of the key roles on Devs-as a servant at Nathan's compound.

But the strongest thing about the movie is just how gorgeous it looks. The remote house is just a great location, combining fine special effects with smart location work, very similarly to the company office on Devs (the film's lone Oscar nomination was for Best Visual Effects.) And the ending is one of those things that's more forbidding and unsettling than anything that came before.

Also a big part of what works is the consistently creepy musical score, from Ben Salisbury and Geoff Barrow, who also scored Garland's other work.

Ex Machina is not Garland's best work as a director, as Annihilation has it beat in terms of both ideas and aesthetic inventiveness, while Devs goes even deeper and more in-depth. But the film nevertheless accomplished what it set out to do, and was one of the best sci-fi debut films in recent memory.