The FJ-1 Fury: The Grandfather of All of America’s Jet Fighters 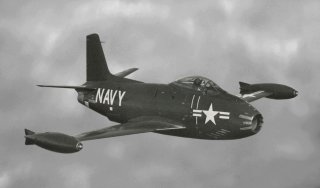 Although piston-engine airplanes conducted the overwhelming majority of aerial combat during World War Two, the United States and indeed a number of other European countries realized the potential speed advantages offered by jet engine aircraft. Nazi Germany in particular made several forays into jet engine designs that were from a mechanical perspective not unsuccessful.

One of their designs, the Messerschmitt Me 262, holds the title of the first jet fighter, though the design came too late in the war to significantly turn the tide in Germany’s favor thanks in large part to mismanagement of epic proportions. The United Kingdom also introduced a jet fighter during the war, the Gloster Meteor, which was the Allies’ only jet aircraft to experience combat during World War Two.

Post-war, the United States was keen to put jet fighters into service—and not just the Air Force. The U.S. Navy had won the war in the Pacific in part thanks to carrier-based fighters, and the benefits in speed offered by jet-engine aircraft were of obvious value.

Like the P-51, the FJ-1 Fury retained a straight wing design as well as a tail control surface assembly that was quite similar to the older Mustang. The two airplanes’ canopies were also similarly constructed, though the Fury’s canopy was moved farther forward to afford better pilot visibility during carrier landings.

Although swept wings are of obvious aerodynamic value for flight at high subsonic and supersonic speeds, the Fury’s top speed was over 200 miles per hour below Mach 1, and retained a straight wing design. Both the German Messerschmitt Me 262 and the British Gloster Meteor were twin-engine designs that housed their engines below the wing as the Messerschmitt design, or integrated into the wing, as was the case with the Meteor.

The Fury however relied on a single engine for thrust, and rather than housing the engine in or below the wing, buried its engine within the airplane’s fuselage with the air intake forming a circular hole in the airframe’s nose. The Fury also carried six .50 caliber machine guns arranged in the nose with 250 rounds of ammunition each for protection.

Like most fighters, the Fury carried self-sealing tanks rear of the pilot which if punctured, would not leak the entirety of their contents. Interestingly, however, the Fury also carried non-self-sealing auxiliary fuel tanks on its wingtips that were also jettisonable when empty or in case of an emergency landing. With the auxiliary tanks fitted to the jet’s wingtips, the range of the craft was nearly 1,500 miles.

While the FJ-1 Fury was not in and of itself a great jet fighter, the transitional jet design helped improve future Navy aviation jet designs and holds the distinction as the Navy’s first jet fighter and makes for an interesting piece of immediate post-war naval history.