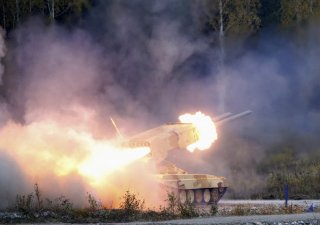 The United States military officially retired flamethrowers in 1978, yet unlike such horrific weapons such as poison gas, landmines, and blinding laser weapons, there are currently no specific international bans on the use of flamethrowers. However, Russia remains one of the nations that still maintain such weapons in their arsenals, and had used its RPO series of flamethrowers against separatist forces in the First and Second Chechen Wars, while the use of such a weapon was reportedly used against a Ukrainian border checkpoint in August 2014 during the War in Donbass.

The RPO-A Shmel, a man-portable disposable rocket-assisted flamethrower, was first introduced in the late 1980s and entered service with the Soviet Armed Forces. It combines elements of a traditional flame thrower with a rocket launcher. Russia is now reported to be developing a new RPO-2 flamethrower with some of its elements to be mounted on drones.

"In particular, efforts are underway to create a new incendiary weapon (RPO-2) for flamethrower units of the radiation, chemical and biological protection troops to feature improved combat capabilities, with sight and gun systems mounted on unmanned aerial vehicles," Kirillov added.

The first such rocket-propelled flamethrower for use by infantry was the RPO Rys ("Lynx"), which was developed in the early 1970s. It was one of the earliest weapons of its type, but also reportedly one of the largest and most powerful of such weapons developed.

According to Military-Today, the Soviet Army's interest in such an RPG-type weapon as a potential replacement for their flamethrowers was likely influenced by the performance of the U.S.-made XM191 and the M-202 Flame Assault Shoulder Weapon (FLASH), which was a rocket-based system that could hit a target five times further away than the older World War II-era devices, such as the M2 flamethrower.

However, while the upgraded M202A1 has remained in the U.S. arsenal, and is also employed by the South Korean military, the DoD unilaterally stopped using the weapons. The last American infantry flamethrower was the Vietnam-era M9-7.  The effectiveness of flamethrowers has been questioned, and while not generally banned, there are the international humanitarian law (IHL) treaty norms, which specifically regulate incendiary weapons as found in the 1980 Protocol III on Prohibitions or Restrictions on the Use of Incendiary Weapons to the Convention on Prohibitions or Restrictions on the Use of Certain Conventional Weapons (Protocol III).

That includes, "any weapon or munitions which is primarily designed to set fire to objects or to cause burn injury to persons through the action of flame, heat, or combination thereof, produced by a chemical reaction of a substance delivered on the target."