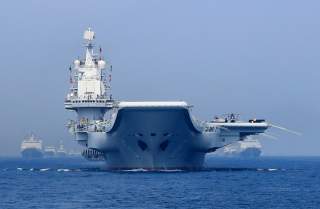 Hybrid styles of warfare are nothing new, and a big part of China’s current military playbook originating decades earlier—something Washington must pay attention to in the months and years to come.

While Asia watchers the world over debate China’s latest moves to transform the status-quo in the South China Sea one fake island at a time, we must remember the starting point of Beijing’s quest for dominance in this vital body of water: a brief and bloody battle with Vietnam in 1974 over the Paracel Islands. History clearly shows that it was this fast-paced and intense clash which set events into motion, a battle between Asian powers that is not very clearly understood—until now.

Thanks to the great work of scholar Dr. Toshi Yoshihara, a Professor at the United States Naval War College and one of the world’s best China defense watchers, we now have a much greater understanding of this brief struggle thanks to his recently published research, what he calls “a first cut at an important but largely underappreciated episode in China’s march to the seas.” The good professor also shares important details on how this battle likely influenced current Chinese tactics, laying out in stunning detail “how Chinese strategists tailored their tactics so as to coerce, deter and defeat a rival claimant in the South China Sea.”

Indeed, Yoshihara’s recent piece for the always impressive Naval War College Review titled The 1974 Paracels Sea Battle: A Campaign Appraisal, is a must read for those who want to know more about this brief conflict along with relevant lessons that apply today’s South China Sea showdown. As Yoshihara explains:

“The conflict and its aftermath. . . left an outsize and lasting legacy in Asian international relations. The territorial dispute that gave rise to fighting forty years ago remains unresolved and continues to stoke Sino-Vietnamese enmity. When Beijing placed an oil rig in waters close to the Paracels in May 2014, violent protests targeting Chinese businesses broke out across Vietnam. At sea, Vietnamese maritime law enforcement vessels sought to break the security cordon formed around the rig by Chinese civilian, paramilitary, and naval vessels. Amid the standoff, bilateral relations plunged to new lows. The contest, then, is far from over; and the passions the dispute still stirs up trace back to 1974.”

But there is much more to the piece, twenty-four pages in all, than that—a comprehensive and far reaching work to say the least. He begins by reviewing the geographic setting as well as the historical context of the dispute. Yoshihara then recounts prior moves in this disputed area that brought China and South Vietnam to eventual blows. He then describes the battle in an epic style along with its aftermath—using mostly hard to come by Chinese sources which color most of his research. These sources craft an interesting narrative of the battle, taking a strong look at China’s civil-military relations, operational performance of Beijing’s navy and most important of all, the role of China’s paramilitary forces. Finally, he closes out the piece by offering thoughts about how the battle may inform China’s future strategy in the South China Sea and its implications for stakeholders in maritime Asia.

While a complete deep dive illustrating every detail that is worth reading in this excellent long-form article is a tough task in a blog such as this, I offer here five big highlights Asia hands should keep in mind from Yoshihara’s work:

1. Some of the Tactics the Chinese Used in the Battle were Very Innovative

“The commanders received orders to ‘speed forward, fight close, and hit hard.’  The smaller, faster, and nimbler Chinese vessels purposefully sought close combat (贴身战, literally, “stick-to-body combat”) against the larger, lumbering, and slower-firing RVN units. The tactic was to draw so near that the enemy’s main deck guns would overshoot their targets. By fighting while sheltering in these blind spots, the Chinese effectively nullified the superior range and lethality of the enemy’s firepower. The PLAN commanders chose a knife fight against an adversary expecting a gunfight.”

2. After Vietnam’s defeat on the water and on the islands themselves, they briefly considered escalating the conflict, seeking American help

“Stung by the defeat, Saigon threatened to escalate. The South Vietnamese navy reportedly sent two destroyers to reinforce Da Nang and directed six warships to head toward the Paracels. The RVN high command also alerted all ground, naval, and air forces to heighten readiness for war. President Nguyen Van Thieu, who arrived in Da Nang to oversee his forces personally, allegedly ordered the South Vietnamese air force to bomb Chinese positions on the Paracels—before rescinding the decision. At the same time, Saigon requested assistance from the U.S. Seventh Fleet, but to no avail.”

“The civil-military integration of China’s maritime power, involving the militia and the fishing trawlers, contributed directly to operational success. The militia, stationed forward on Woody Island, acted on short notice. Akin to a rapid-response force, the militia slipped onto the Crescent Group’s southeastern islands under the cover of night, preempting the Vietnamese. Indeed, the militia threw back RVN commandos attempting to seize the islands the next day. The ability to act quickly and effectively denied operational objectives to the enemy while likely buying time for regular troops to mobilize on the mainland. Finally, the militia took part in the seizure of Robert and Pattle Islands that helped to secure China’s control of the entire archipelago.”

“At sea, trawlers Nos. 402 and 407 acted as first responders. Months before the battle, the fishing boats maintained initial presence in the Paracels while asserting claims to the islands by planting flags on them. The trawlers then sent early warning to headquarters ashore when RVN warships first arrived in the Paracels. The leaders on board also furnished tactical intelligence to the PLAN’s local commanders at sea. The ships helped transfer the militia onto Duncan, Drummond, and Palm Islands the night before the battle and provided the means to conduct landings on Vietnamese-held islands after the RVN warships fled the area. The fishing boats were pivotal in the rescue of crippled minesweeper No. 389.”

“Just as armed trawlers played an outsize role throughout the Paracels campaign, civilian and paramilitary vessels took part in the Scarborough Shoal incident. Chinese fishing boats triggered both crises by engaging in activities that, at least in the eyes of rival claimants, were illicit or provocative. Militia-crewed boats in 1974 and paramilitary ships in 2012 acted as China’s first line of defense, helping to probe the intentions and capabilities of their opponents while asserting Beijing’s claims. The noncombatant vessels enjoyed the protection of the PLAN even as they served as the eyes and ears of the Chinese navy. Such mutual support enabled China to evaluate the tactical circumstances; demonstrate resolve without militarizing the confrontation during the initial stages; calibrate the level of coercive pressure needed to compel the opponent’s will; and, should deterrence fail, apply force.

“The civilian character of the Chinese vessels constrained their rivals’ navies. The South Vietnamese and Philippine navies were apparently loath to fire directly on lightly armed or unarmed civilian vessels, lest they risk major escalation or diplomatic fallout. The two services thus found themselves maneuvering and posturing in vain to expel the Chinese ships.”

5. What Lessons Should the United States and its Allies/Partners in Asia take away?

“Somewhat counterintuitively, a more powerful PLA [in 2016] could render unnecessary violent clashes like the Paracels battle. Instead, China may rely even more on its maritime law enforcement ships—the signature feature of China’s maritime coercion in recent years—to assert its territorial claims while the Chinese navy backstops such noncombatant units from just over the horizon. The Scarborough Shoal incident and the ongoing face-off over the Senkaku/Diaoyutai Islands amply demonstrate this civil-military integration of maritime power. Greater conventional military means will thus further empower irregular forces to impose China’s will on rival claimants. And, if all else fails, Beijing can still call on its navy to settle a dispute. That China—unlike its weaker rivals—has the option of climbing the escalation ladder only amplifies the intimidation factor. Indeed, the navy’s lurking presence may induce an opponent to back down in a crisis, as it apparently did during the Scarborough confrontation.”

While my short, quick-hits summary does not do justice to this fascinating piece of original research, one thing is quite clear: hybrid styles of warfare are nothing new, and a big part of China’s current military playbook originating decades earlier—something Washington must pay attention to in the months and years to come. And even more reason why we must always remember to study the past to gain valuable lessons about the times in which we live.