A Flying Tank: The A-10 Warthog Is Old But Still Unstoppable 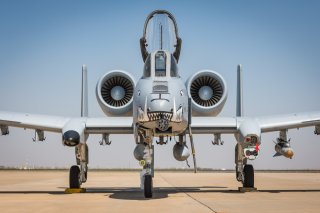 Often called a “flying tank,” the classic and much revered A-10 Warthog plane has for years been cherished by ground forces under enemy fire in combat. The battle-tested aircraft continues to live into future years due to various upgrades and sustainment efforts.  The aircraft’s titanium hull, flight trajectory, and redundant electronics enable it to both withstand incoming enemy small arms fire as well as hover above and fire its 30mm cannon during dynamic fast-moving warfare scenarios. The A-10 is especially known for its ability to survive enemy attacks and can even keep flying in the event that some of its main systems are disabled, damaged, or destroyed.

The aircraft, which has conducted attacks and ground support through many decades to include the Gulf War, Kosovo, and wars in Iraq and Afghanistan, continues to fly despite some discussion about its potential retirement. Part of the rationale for its continued utility, which is considered quite significant by weapons developers, is based upon the broad recognition that today’s A-10 is quite different than it may have been years ago due to continued integration of new weapons, avionics, communications systems, and computer technology.

Naturally, many modern aircraft technologies, electronics, and sensors increasingly rely upon secure and effective data organization, analysis, and transmission to ensure optimal combat functionality, a dynamic which of course requires advanced onboard processing.  An example of a pertinent computing technology performing these functions is Raytheon’s Common Open Secure Mission Computer (COSMC) product family that leverages digital engineering and a Development, Security, and Operations (DevSecOps) software environment intended to get the capability to the warfighter faster and as its developers say “provide an Open Computing Environment” for the end-user.

“We know the lifetime of the A-10 has been extended...and we know with all the new capabilities and mission systems envisioned for the A-10 that the mission computing or digital infrastructure on the platform is going to be a critical factor to maximizing lethality and survivability,” Michelle Moholt, Senior Principal System Engineer at Raytheon Intelligence & Space, told the National Interest in an interview. Raytheon is uniquely qualified to understand the processing requirements for the A-10 as it is the provider of on-board processing systems for the U.S. Air Force’s 4th and 5th generation of aircraft.

Using digital engineering and open-systems or modular computing, the COSMC effort aims to increase speed to deployment while reducing program risk and cost. By leveraging a set of models and reusable hardware and software elements the time required from program onset to fielding is greatly reduced.  COSMC employs a flexible and scalable architecture that enables easy upgrades as technology advances which, in turn, allows the end-user to ensure the ‘best of breed’ from the commercial processing industry is deployed to the warfighter to guarantee combat overmatch.  In December 2020, United States Special Operations Command (USSOCOM) selected Raytheon’s COSMC for the AC/MC-130J NextGen Special Mission Processor likely due to many of these same attributes.

The A-10 carries a full complement of weapons, including GPS-guided Joint Direct Attack Munitions. Its arsenal includes Guided Bomb Unit (GBU) 38s, GBU 31s, GBU 54s, Mk 82s, Mk 84s, AGM-65s, AIM-9 Sidewinder missiles, and rockets along with illumination flares, jammer pods, and other protective countermeasures. The aircraft can carry 16,000 pounds of mixed ordnance—eight can fly under the wings and three under the fuselage. When it comes to targeting, navigation, and precision, enhancements in mission computing could prove crucial to upgrading combat performance for the A-10 by enabling new weapons systems for the platform.