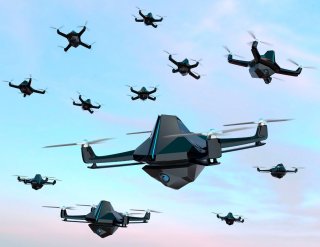 A Ford 250 pick-up truck was armed with a 30mm chain gun, remote weapons station, targeting system, and advanced sensors for the purpose of tracking and destroying enemy drones while on the move from the ground.

The live-fire demo was intended to evolve, refine and improve emerging counter-drone technology combining new weapons applications, sensing, fire control, and ammunition to track and eliminate drones from the ground. The 30mm Chain Gun was operated from the passenger’s seat in specific scenarios intended to replicate warfare engagements with hovering and moving drone threats, Rob Menti, Business Development director for Northrop Grumman, told the National Interest while discussing the event in Arizona.

The Ford pickup truck was used in an experimental capacity to assess the ability of an integrated counter-drone weapons and targeting system for a wide range of armored vehicles platforms. This kind of counter-drone system could integrate onto the emerging Robotic Combat Vehicles and manned or optionally manned systems such as a Stryker Vehicle or new Optionally Manned Fighting Vehicle (OMFV) Bradley replacement.

In the Arizona desert in November of 2021, the pickup truck fired the XM 1211 30mm Bushmaster cannon at drone targets using a “proximity fuse” that can detonate upon sensing enemy drones within attack range of the explosive.

“Utilizing Bushmaster cannons with proximity-fused ammo, we can engage drones with small 30mm out to about 1000 meters,” Menti said. An Mk 44 weapon, he added, can destroy small drone swarms out to 2,000 meters using a High Explosive Proximity round.

Certain small drones can hit speeds of sixty to seventy miles per hour, and some are small enough to fit in the palm of the hand. Swarms of these can be dispatched to blanket an area with Intelligence, Surveillance, and Reconnaissance (ISR), build-in redundancy so a mission can continue if one is destroyed or even become explosives themselves programmed to detonate upon impact.

Attacking drone swarms can cause some real problems for the attacked force, according to a 2017 report from the Bulletin of the Atomic Scientists. The essay, called “The Upside and Downside of Swarming Drones,” discusses some of the reasons why drone swarms are difficult to defend against. “Swarming is advantageous for offensive missions because it can overwhelm enemy defenses with a large number of potential targets," the report, written by Irving Lachow, states. "In a swarming attack, the drones are dispersed, which makes it difficult and expensive for the adversary to defend itself. If 10 drones attack a target simultaneously and 7 are shot down, 3 will still be able to complete their mission.”