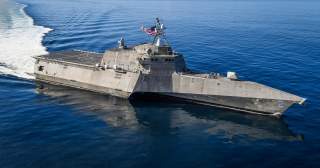 The U.S. Navy and Marine Corps are in the throes of an organizational crisis as they come to terms with the increasing range, accuracy and number of Chinese anti-ship missiles in the western Pacific region.

The Navy and Marines believe they must reorganize in order for their forces to survive in the face of Chinese missile barrages. Instead of traditional amphibious ready groups with their big, vulnerable assault ships, the fleet aims to set up so-called Expeditionary Advanced Bases on land and at sea in order to support air, ground and sea forces in wartime.

But the Pentagon isn’t ready to build these bases. And they still would require naval groups to supply them and to move forces forward for combat missions. It’s an open question what kinds of ships the Navy should deploy for this purpose, and how they should organize.

Marine Corps lieutenant colonel Roy Draa has an idea. Writing for the Center for International Maritime Security, Draa proposed the U.S. maritime services quickly form Littoral Combat Teams and Littoral Combat Groups. The LCTs are the air and ground forces. The LCGs are the ships that transport that LCTs.

An LCT would be made up of “task-organized Marine forces, including electronic warfare, unmanned aviation systems, engineers and construction battalions and missile batteries, to name a few,” Draa wrote.

The littoral teams and their supporting ship groups must have the weapons they need to attack the enemy and defend themselves, but they also must be “risk-worthy,” to borrow a phrase from Marine Corps commandant Gen. David Berger. In other words, small and cheap enough to be expendable without also jeopardizing thousands of lives.

Draa proposed two kinds of LCGs. Heavy and light. “A heavy variant of an LCG could be comprised of an L-class [assault] ship and an Expeditionary Sea Base Montford Point-class ship, supported by a composite Littoral Strike Squadron composed of Littoral Combat Ships.”

The purpose of these ships would be to distribute warfighting capabilities throughout the stand-in force’s area of operations, with their lighter drafts permitting in-shore mobility. Lighter options for LCGs would drop the L-class vessels, relying on an ESB, four LCS performing various composite warfare functions and multiple smaller support/inshore vessels.

Air defense would be a problem, Draa conceded. Lacking support from the destroyers and cruisers that carry the Navy’s heavy surface-to-air weaponry, the littoral groups should sail with Marine air-defense troops plus Marine drones carrying electronic jammers.

Draa explained that his concept “gives the fleet a forward presence in times of peace and leading up to conflict [and] the ability to be present and to compete within a contested maritime environment.”

“As with any well-intentioned concept, additional discussion must be fostered to address the potentially costly training and sustainment of new force packages and force structure,” he added. “Furthermore, significant analysis remains to wargame potential PRC operational and strategic reactions to coalition efforts, lest we overlook requirements to address likely adversary responses to this force design and employment concept.”