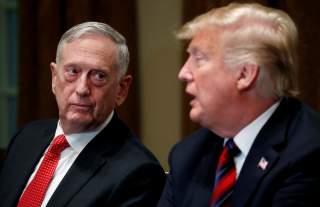 We have some better ideas.

Former defense secretary James Mattis plans on dropping a book in July, and we couldn't be more excited.

According to the Associated Press, 'Call Sign Chaos: Learning To Lead' won't follow the traditional Trump-era tell-all formula. Instead, Mattis's tome will offer an "expansive account" of his lifetime of public service from the the beginning of the Global War on Terror to, yes, his time leading the Pentagon

"I'm old-fashioned: I don't write about sitting Presidents, so those looking for a tell-all will be disappointed," Mattis said in a statement to the Associated Press. "I want to pass on the lessons and experiences that prepared me for challenges I could not anticipate, not take up the hot political rhetoric of our day."

This capsule description sounds fitting for a Marine general so disciplined and methodical that he's known as a "warrior monk" of Washington. But I have one objection so far: the title stinks.

Yes, all beach-season DC reads have terrible titles (with the exception of maybe "This Town," which is both accurate description and furious epithet all in one), but "Call Sign Chaos" sounds like a direct-to-DVD movie from the studio that brought America "Sharknado."

Perhaps Mattis wanted to do permanently do away with the "Mad Dog" monicker he so despised during his time in the Pentagon E-Ring and forever supplant it with a reminder that Colonel Has An OutstandingSolution. A book is a chance to do that among a civilian audience, I get it.

But at the same time: come on. This is James Mattis! This is the same man who, as I noted last week, once told Iraqi leaders, "I come in peace. I didn't bring artillery. But I'm pleading with you, with tears in my eyes: If you f*ck with me, I'll kill you all!" He deserves better than 'Call Sign Chaos'!

To wit, the Task & Purpose edit team came up with a few, uh, unauthorized suggestions for working titles. We hope Chaos likes them and doesn't knife hand us to death in our sleep (pro tip: if you're running out of ideas, just take the name of a romantic comedy and swap in "kill" for a word):

I never said these were good.