Forget Coronavirus: 7 Films Explain Why We Still Worry About the Zombie Apocalypse 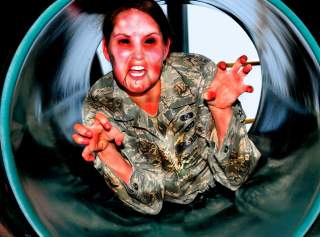 This is all about zombies and COVID-19, but first—stick with me for a bit of science.

Years ago, the University of Delaware Disaster Research Center conducted a survey asking people how others would respond to disasters. Most respondents, having never lived through a disaster themselves, described scenes of mayhem, a free-for-all with looting and shotguns. Then, when asked how they would respond in a disaster, most replied they wouldn’t panic; rather, they would follow the directions of public officials and help their neighbors.

The “others” response described what we see in disaster movies, including those where we’re up against mobs of the living dead. On the other hand, respondents departed from the Hollywood script by predicting that they personally would not do stupid stuff, like trying to borrow a cup of sugar from a guy wearing a mask of human skin and carrying a chainsaw.

The survey validated what the researchers suspected.

Our brains have two sides for disasters. One is our imagination. The other is the reality that, in a real disaster, people act pretty normal and, usually, quite responsibly. If anything, Americans sometimes tend to under-react—like today’s college yahoos still partying on Spring Break—until they understand the situation is really serious.

Of course, most normal people do panic in disasters. It happens, for example, when they’re trapped in a confined space when something bad goes do—say, a fire in a crowded nightclub. It also happens when people feel authority and society are falling apart, leaving them unable to cope with the situation themselves.

The latter rarely happens—and it’s unlikely to happen during the COVID-19 pandemic. While there are legitimate disputes over what steps the United States should take to get ahead of the COVID-19 curve, but there is no question that steps have been and are being taken to flatten the curve.

Yet it’s times like these when the public’s craving for nightmare-scenario cinema goes up. Engaging with horrific situations that can’t actually hurt you is a great stress reliever. So if disaster horror is the way you kick out your jams, there is nothing better than a good zombie movie—as long as you aren’t looking for survival tips.

Here are seven films that must be part of anyone’s cinematic canon of zombies gone wild.

#7. Revolt of the Zombies (1936). In the wake of the Great Depression, Americans needed silver screen nightmares to distract them from the real horror of being broke and jobless. Then they had to deal with the horrors of World War II. Hollywood delivered with Dracula (1931); Frankenstein (1931) and The Wolf Man (1941). Tinseltown also produced a series of zombie movies. Unlike modern zombies, where the living death spreads like a plague, these dead walked because they’d been brought back to life by weird magic. Revolt of the Zombies is one of the more inventive of these movies. After sending the dead “over there” to fight in the trenches of World War I, a mad genius (as mad geniuses do, comes up with a plan for an army of the dead to conquer the world. Think of the savings in Pentagon retirement and healthcare spending!

#6. Night of the Living Dead (1968). George Romero’s film, made on a shoestring budget, is the grandfather of the modern zombie movie. In addition to introducing the concept of deadness spreading like a plague, he made the dead even more scary and revolting by having them possessed of an insatiable hunger for human flesh. Coming out at the height of the Vietnam War, America’s most existential crisis since the Great Depression, this film was a cult hit, (The 1990 remake is also worth watching, if only to see how the times-they-have-a-changed: the woman protagonist goes from victim to hero.)

#5. Dawn of the Dead (1978). The makers of Night of the Living Dead got into a protracted court battle over ownership of the property. Ultimately, the judge split the baby. George Romero could only make “dead” movies. In 1978, with the economy mired in stagflation, Americans were in a deep funk. In response, Romero delivered a nihilistic indictment of consumerism—where a shopping mall becomes man’s last best hope. That does seem like the ultimate nightmare.

#4. Return of the Living Dead (1985). When Americans stopped worrying about the end of America, zombie movies went on hiatus. Then, Romero’s former partner Dan O'Bannon, started making “living dead” movies. Coming out in the Reagan-era, when Americans were feeling good again, these zombies were played for laughs. Inept zombie fighters become a lunch buffet for inept zombies—and, of course, it’s the government’s fault.

#3. 28 Days Later (2002). In the wake of 9/11, the real scary zombie movie rose from the dead. This film beat Romero’s excellent remake of Dawn of the Dead to the screen by two years. They both introduced something new to the zombie canon. Unlike Romero’s earlier, lumbering dead, these modern zombies race around like ravers on coke. Moving the scare up a notch, hyper-fast zombies deliver a new sense of powerlessness among the mere humans. Today, fast zombies are the new norm.

#2. Zombieland (2009). When America realized it wasn’t going to be overrun by terrorists, it was time to go back to treating zombies for laughs. Zombies of Mass Destruction (2010) specifically lampooned Bush’s America, but the best of the lot was Zombieland, more like a Hope and Crosby road picture than a horror movie. (By the way, avoid the 2019 Zombieland sequel at all costs. It’s dreadful.)

#1. Train to Busan (2016). Zombies don’t roam exclusively in the good ol’ USA. Italian filmmakers have cranked out endless Night of the Living Dead rip-offs like 1979’s inventively titled Zombie. But the award for best modern-zombie foreign film goes to this Korean masterpiece, in which a commuter train tries to outrace zombies. [Spoiler alert: the zombies win.] Artfully blending horror and humor, this is the best terror train movie since Horror Express (1972). And South Korea continues to crank get horror hits—like The Kingdom, the story of a medieval Zombie outbreak.

Right now, one would imagine new zombie-plagues films would be hitting too close to home for contemporary audiences. That’s probably okay. This genre is overdone and overloaded with too much derivative, unimaginative, dreary, bloody nonsense. Time for a zombie time-out.

But, if watching zombie flicks keeps folks at home and makes social distancing more effective, that’s all to the good. The one contribution we can all make to flattening the curve is effective distancing and following CDC guidelines. Let’s all do our part. Watch on.