Forget the F-35, Britain Is Already Planning for a 6th Generation Fighter 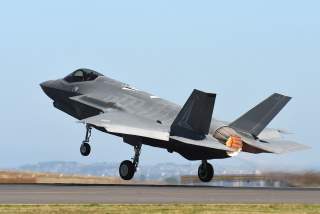 Britain is expected to begin outlining its path to develop a sixth-generation fighter jet, according to media reports.

On July 4, The Financial Times reported that Britain is expected to at least announce a commitment to begin building the sixth-generation fighter by 2020. This followed an earlier report from Defense News that “expectations are growing” that London “will use a huge gathering of international air force chiefs in the United Kingdom in mid-July to outline a strategy leading to development of a new generation of fighter jets for the post–2040 era.”

These expectations derive from a number of different factors. First, the UK’s Ministry of Defense has spent the last few months working with England’s defense industry to develop an air combat strategy. That strategy is expected to be published before the end of the month.

Second, Britain is set to hold the Royal International Air Tattoo at Fairford as well as the Farnborough air show this month as part of the Royal Air Force’s centenary celebrations. Fifty air force chiefs from around the world are expected to be in attendance.

Third, as The National Interest noted last month, France and Germany have made progress in a joint program to develop a sixth-generation fighter. In specific, Paris and Berlin recently announced that France would take the lead in developing the new planes.

Germany and France had signed a ten-page common requirements document outlining the capabilities the next generation fighter should possess. Along with saying that France would take the lead on the plane’s development, Paris also announced that work on the plane will begin this year, starting with a study phase.

Although Berlin and Paris have left open the possibility of a country like Britain joining the program later on, some have seen the move as a response to London’s decision to leave the European Union.

This appears to have energized Britain to show some of its own progress, although how much is unknown. Along with outlining a 2020 timeline to award a contract for the plane, The Financial Times reported that the announcement will “set out policy goals, future requirements and timelines for certain milestones on a future fighter program.” The British newspaper said it is unclear if funding will be announced at this time.

A couple of factors limit how far Britain can go with regards to the sixth-generation fighter. The first is that London does not know which country (or countries) it will be partnering with to develop the plane. It is almost universally accepted that Britain doesn’t have the resources to build the plane by itself. The hope is that making some unilateral progress will help entice a partner or perhaps multiple partners.

One option is that eventually London will join the German-Franco program. But there’s some complications with that option. For starters, as already noted, Berlin and Paris might want to exclude Britain to make an example of it for leaving the EU. In addition, some observers believe London will need its fighter jets sooner than Germany and France.

Other potential partners include Turkey and Japan, but those options present their own set of problems. For instance, BAE Systems, a British firm, has already agreed to help develop the TF-X fighter program with Turkey. But that program has run into issues with technology transfers.

Britain and Japan have already discussed collaborating on a next generation fighter. But Japan does not have the same experience building planes as some other countries. When building planes like the F-2 multi-role fighter it has relied heavily on international expertise.

This could be attractive to Britain, however, as an English firm (likely BAE systems) could take the lead. This is something that London is expected to demand. In addition, collaborating with Japan would be a powerful symbol of England embracing a post-European turn in its foreign policy.

Other potential partners for Britain include Sweden, Italy, and the United States. Indeed, The Financial Times is reporting that London is in talks with Sweden about collaborating on the program.

The other reason to temper expectations on the British announcement is that there is no agreed upon definition of what a sixth-generation fighter is. And, given the rate of technological innovations, it is probably unwise to decide on the technologies twenty years in advanced (although development times requires countries to begin thinking about this now).

One capability commonly discussed with regards to sixth-generation fighter jets is whether they will be unmanned or not. Artificial intelligence is likely to play a major role in the next generation of fighters, and each plane is likely to control a larger fleet of drones or other unmanned entities. Regardless, these sorts of issues need to be decided before any country makes any progress on building a six-generation plane.

Image: Geelong, AUSTRALIA – An F-35 Lightning II stationed at Luke Air Force Base, Ariz., departs the runway during the Australian International Airshow and Aerospace & Defence Exposition (AVALON) March 4. AVALON 2017 is an ideal forum to showcase U.S. defense aircraft and equipment, particularly the latest in fifth generation capabilities such as the F-22 Raptor and F-35 and it is the largest, most comprehensive event of its kind in the Southern Hemisphere, attracting aviation and aerospace professions, key defense personnel, aviation enthusiasts and the general public. The U.S. participates in AVALON and other similar events to demonstrate the U.S. commitment to regional security and stability. (U.S. Air Force photo/Master Sgt. John Gordinier). Wikimedia Commons