Forget the Rise of Skywalker: Let Me Tell You Why I Hate Star Wars 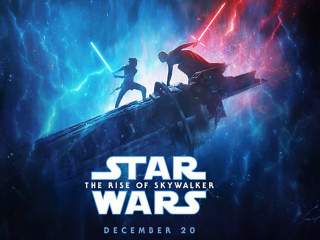 On December 20, the last installment of Disney’s Star Wars trilogy will cash in at the box office. A new trailer for Episode IX - The Rise of Skywalker is expected any minute now, and rabid fans are salivating in anticipation.

As for me, I already hate the film. From day one, these movies have been the step child of crass commercialism. This is not how we want to inspire the next generation to reach for the stars.

Since its first release of the re-digitized originals, I’ve been an unrepentant critic of Disney for turning the rebellion into a cash cow. Then again, I was never all that impressed with any of the Star Wars sagas, other than the first film, of course.

Most everyone loved the original Star Wars (1976). It was a brilliant film, nostalgically reimagining the black-and-white cliff hangers like the original Flash Gordon (1936). A well-crafted action thriller, it heralded the arrival of a rising director with a brilliant vision for the future of cinema.

Even more importantly, we loved Star Wars because it was the film America needed. In the mid ‘70s, America was in a funk. We were jaded and diminished by the Vietnam War; depressed by stagflation; burned by Watergate, and plagued by movie after movie with no heroes, anti-heroes, or no survivors, period.

In contrast, Star Wars gave us noble characters, fighting for noble causes and winning. It was adrenalin for the American psyche.

To be honest, none of the subsequent movies measured up. The problem with the rest of the Lucas films was that they were just filling in details. Episodes I through III were particularly unsatisfying, telling a story when we already knew how it ended. It was like coming in late, watching the last half of a movie, and then sitting around for the next showing just to see if you missed anything. You didn’t.

When Disney bought the Star Wars universe, the company added precisely nothing. No cool new technology. No dynamic new characters. Instead, it just rehashed the same plotlines ad nauseam. You can pretty much expect that the next film will be just as predictable—and interchangeable—as all the other Star Wars retreads.

What we really need from a space film today is something as new and challenging as the original Star Wars was—something that gets the next generation excited about space as something other than a theme park ride.

The last time America got excited about space was when Ronald Reagan talked about the high frontier. Critics decried his space-based Strategic Defense Initiative as a “Star Wars” fantasy, but despite many fits and starts, it is slowly becoming reality.

Today, America is about to embark on a new race for space.  In the next decades, we will spend trillions of dollars to go where no one has gone before. We are fielding a space force. We are going back to the moon—then to Mars—and from there… who knows?

With America poised to move several “giant steps” farther into “the last frontier,” Hollywood should be producing movies that inspire us to meet the challenges “out there.”

The Martian (2015) is a good example of the kind of space films we really need. Based on a best-selling book, Matt Damon survives on the red planet in a homemade timeshare. What’s cool is that all the science is real, introducing viewers to the problems of moving to Mars.

Disney could have reinvented Star Wars to break new ground and excite America’s youth. Instead, they’ll be happy with merchandising, selling theme park subscriptions, and signing up subscribers to their new streaming service.  It’s enough to make a droid cry.