Forget Tanks, The Army's Most Powerful Weapon Will Be AI 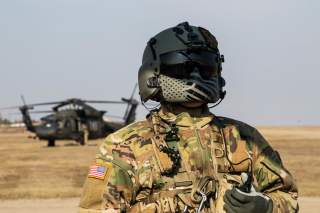 Key point: There is an ongoing co-evolution between indispensable human cognition and decision-making and AI-enabled autonomy.

(Washington, D.C.) Envision a scenario wherein dismounted infantry soldiers are taking heavy enemy fire while clearing buildings amid intense urban combat -- when an overhead drone detects small groups of enemy fighters hidden nearby, between walls, preparing to ambush. As the armed soldier's clear rooms and transition from house to house in a firefight, how quickly would they need to know that groups of enemies awaited them around the next corner?

Getting this information to soldiers in seconds can not only decide victory or defeat in a given battle but save lives. What if AI-enabled computer programs were able to instantly discern specifics regarding the threat such as location, weapons and affiliation by performing real-time analytics on drone feeds and other fast-moving sources of information, instantly sending crucial data to soldiers in combat?

While current technology can today perform some of these functions, what if this data was provided to individual dismounted soldiers in a matter of seconds? And instantly networked? Operating in a matter of milliseconds, AI-empowered computer algorithms could bounce new information off vast databases of previously compiled data to make these distinctions--instantly informing soldiers caught in the crossfire.

“The use of autonomy will assist in assimilating data from these various systems and quickly provide useful options to command decision-makers including individual Soldiers. Over time, more and more new intelligent technologies will be introduced,” Dr. J. Corde Lane, Director of the Human Research and Engineering Directorate, CCDC-Army Research Laboratory, told Warrior in a written statement.

Much of this work centered upon near and far-term applications of AI is being done by the ARL's Cognition and Neuroergonomics Collaborative Technology Alliance. Army scientists and many of its industry partners rest the entirely of this conceptual approach upon a key premise -- that AI and autonomy are intended to massively improve the soldier decision-making process and not displace the crucial and much need faculties unique to human cognition. The idea is to have AI-enabled technical systems perform instant procedural functions able to instantly inform humans operating in a role of command and control.

The Army calls this overall process “Soldier as a System”...the concept of using computer networking and the latest algorithms to seamlessly integrate otherwise disconnected nodes operated by soldiers. Specifically, this means a single electronic architecture will connect night vision goggles, individual weapon sites, wearable computers, and handheld devices showing moving digital maps and time-critical intelligence data. Information from all of these otherwise separate soldier technologies, which can also include acoustic and optical sensors or mobile power sources, such as batteries, is naturally interdependent and interwoven in crucial battlefield circumstances. Therefore, an ability to use various applications of autonomy and AI to create instant information-sharing in war changes the tactical and strategic circumstances confronted by individual soldiers, massively improving prospects for survival.

The Army is now discussing various technologies and innovations with a handful of industry partners. One such example is Booz Allen Hamilton, a vendor who has been working on a related program called “Digital Soldier.” The system, as described by Booz Allen Hamilton developers, is similarly based upon the concept of creating an overall system or technical apparatus through which to better connect soldier technologies in war.

“We have created some algorithms that can recognize a human in a video feed and recognize the action they are taking. We can see someone who has raised a weapon and immediately cue a heads-up display or drone flying in the area,” Joel Dillon, Vice President of Soldier Solutions, Booz Allen Hamilton, told Warrior.

BAH, the Army and other industry innovators are working to “co-evolve” autonomy and human decisions, recognizing that there many fast-changing emerging problems in war which contain a mix of interwoven and complex variables less calculable by machines and computer algorithms.; the best AI systems, for instance, cannot replicate a lot of subjective phenomena such as certain kinds of “judgement” decisions, feelings or other dynamics associated with human perception.

“The use of autonomy will assist in assimilating data from these various systems and quickly provide useful options to command decision-makers including individual soldiers. Over time, more and more new intelligent technologies will be introduced and will continually change the nature of the battlefield and the very nature of the tasks the Soldiers perform,” Lane explained.

Some future-oriented research and AI-work is now analyzing methods of successfully performing analytics on more subjective nuances associated with human perception and behavior - such as speech patterns or cataloged information regarding previous behaviors, tendencies or decisions. Nonetheless, not only is this work early on, but it does not promise to mitigate some of the known limitations of AI. This question is, interestingly, taken up in a Switzerland-based academic journal known as “Information.”

The 2018 essay, called “Artificial Intelligence and the Limitations of Information,” entertains some of the challenges associated with AI to include complexities related to “meanings” and “inferences.” The journal article, written by Paul Walton, says certain nuances “we are prone to ignore, is at the heart of many fundamental questions about the information. Truth, meaning, and inference are expressed using information, so it is important to understand how the limitations (of AI) apply,” the essay states. (Information is a peer-reviewed scientific journal published monthly by MDPI.)

Walton also cites a difficulty for AI to fully synthesize or compare some different “ecosystems” of information. For example, certain kinds of information collection systems might be unique to individual data sets; the essay, for instance, says financial data compilation may differ from processes used by mathematicians. Therefore, resolving potential differences between what the essay calls “multiple interactions” might prove difficult.

Future AI will, the article explains, need to “analyze the integration challenges of different AI approaches—the requirements for delivering reliable outcomes from a range of disparate components reflecting the conventions of different information ecosystems.”

All this being said, the current and anticipated impact of fast-progressing AI continues to be revolutionary in many ways; it goes without saying that it is massively changing the combat landscape, bringing unprecedented and previously unknown advantages. AI is progressing quickly when it comes to consolidating and organizing data from otherwise separate sensors on larger platforms, such as an F-35 or future armored vehicle…. yet integrating some of these same technical elements has not reached dismounted infantry to the same extent.

For example, Dillon further elaborated that these kinds of emerging algorithms can quickly distinguish the difference between someone extending a weapon or merely digging a hole -- or recognize enemy armored vehicles. The AI-empowered system could also quickly cue a combat analyst so, as he put it…”they don’t spend time pouring over massive amounts of data.”

The concept here is not so much the specific systems as it is a need to engineer and adaptable technical infrastructure sufficient to evolve as technology changes. Lane described this as a co-evolution between indispensable human cognition and decision-making and AI-enabled autonomy. The ARL works closely with Army Futures Command’s Soldier Lethality Cross-Functional Team which, among other things, is focused on this concept of extending Soldier as a System architecture across an Army Squad unit. (Adaptive Squad Architecture)

“In some cases, the better chance of victory will be due to faster adaptability. Creating intelligent systems that are able to self-adapt to Soldiers' needs and seamlessly adjust as Soldiers adapt to the changing situation promotes rapid co-evolution between Soldiers and autonomy,” Lane added.

The Army and its industry partners are now working on advancing the algorithms, writing the code, upgrading hardware and software and engineering the standards through which to create interfaces between nodes on a soldier or between groups of soldiers. For instance, Dillon explained that some of these nodes could include laser designators, input from radio waves or data coming in from satellite imagery overhead. “Computers are so much faster,” as Dillon put it, explaining that algorithms are now being advanced to “train at scale” to analyze a series of images and pinpoint vital moments of relevance.

“We build out algorithms we could run on some kind of soldier-worn system such as a small form factor computer, thermal imaging, daytime cameras or other data coming in quickly through satellites. When you network all of this together and bring in all the sensor data, machine learning can help give soldiers the accurate prompts,” Dillon added. “The more we do this, the smarter the algorithms get.”