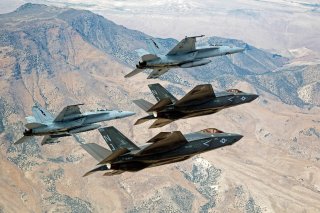 2020 is shaping up to be a very strange year. Coronavirus sidelined sports and delayed countless movies, while the U.S. economy went from record low unemployment to the highest since the Great Depression in a matter of weeks. American cities have endured a summer of often violent protests while daily there are fistfights over the wearing of masks. But the strangest news could be that the State of Israel, which has long maintained a policy of requiring military superiority over its Arab neighbors to ensure that it has an edge in wartime, could sell weapons to the United Arab Emirates!

Forbes.com, citing reports from Israeli media, noted that even the idea of such a move split the Israeli government between those who see that it could damage Israel’s very security and those who argue that arms sales could solidify relations with a former adversary.

The UAE is just the most recent Arab nation—after Egypt and Jordan—to recognize Israel. Modern Israel is a fairly “young” nation, only declaring its independence on May 14, 1948, while being admitted to the United Nations just a year later. By contrast the UAE was granted independence in 1971.

The two nations have never technically been at war, but the UAE's first president, Sheikh Zayed bin Sultan Al Nahyan, referred to Israel as “the enemy.”

What has brought them together is their mutual enemy: Iran. The UAE is hardly alone among the Gulf states to move closer to Israel in recent years. Now it seems that the two countries could even become regional partners.

One issue that looked like it could have derailed the peace process would be whether the United States would sell the UAE the Lockheed Martin-build F-35 Lightning II Joint Strike Fighter, and currently Israel remains the only Middle Eastern nation to operate the fifth-generation stealth fighter jet.

Publicly, Israel’s leaders have been against the deal, and that seemed to be a problem in the newly budding relationship.

Many nations of the Middle East live by the ancient proverb that “the enemy of my enemy is my friend,” and at times Israel had been a quasi-friend of the Islamic Republic of Iran—albeit not quite out in the open. During the Iran-Iraq War, Israel saw Iraq as a more serious threat and actually supported Iran.

Before the Islamic Revolution, Iran had been on friendly terms with Israel and both nations utilized American equipment. After ties were cut between Washington and Tehran, the new Islamic Republic was forced to turn to the true enemy of its enemy for aid.

Now it seems the greatest enemy has become Iran, and that has brought Israel closer to the Gulf states including the UAE. As Forbes.com reported, Benjamin Netanyahu’s government denies that it is even contemplating weapons sales to the UAE. But as Iran possesses a far larger military threat than its wealthy Gulf neighbors, the last thing Israel would like to see is Tehran overrunning and then installing more hardline governments in the region.

In addition, weapons—even those a generation behind Israel's "top shelf" platforms—could be attractive to the various Gulf powers. Israel is already a major arms exporter, while rich kingdom’s—notably Saudi Arabia—spend lavishly on its arsenals. Saudi Arabia is now the largest weapons importer in the world, so if a sale of weapons to the UAE could bring a lasting peace, it is possible that a similar deal could get the Saudis to move close to recognizing Israel too.

As long as there is a hostile government in Tehran—and it honestly shows no signs of going anywhere—that could be the greatest catalyst to finally bring peace (at least with Israel) to the Middle East. A coalition of Israel weapons and Arab money could be a mix the Islamic Republic of Iran likely hoped it would never have to face.