The Forgotten Automatic Weapons of World War I 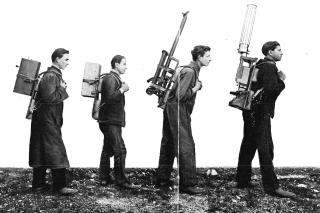 World War I was truly the conflict in which the machine gun came into its own. It offered a devastating rate of fire that was able to mow down any troops that tried in vain to cross no man's land in one of the countless futile attacks. Heavy water-cooled machine guns were employed at the beginning of the war, and that lead to the development of more “mobile” weapons including automatic rifles such as the French Chauchat and American Browning Automatic Rifle.

Germany also produced more machine guns than any other combatant power, yet still relied on captured and foreign-produced machine guns due to the demand for weapons at the front lines. While the war made such weapons as the Lewis Gun and Maxim almost famous, there were still weapons that have been largely overshadowed and almost forgotten.

Here are five machine guns that deserve their moment in the spotlight.

Developed by Prussian firearms designer Andreas Schwarlose at the turn of the century, the water-cooled, belt-fed Schwarzlose M. 7 resembled the German Mashinengewehr 08 (MG08), but it actually featured a far simpler design that relied on a delayed blowback action, which was unusual in early machine gun designs. However, the design also resulted in a far less expensive machine gun, which was one of the reasons cash-strapped Austria-Hungary adopted it as its standard machine gun.

It had a slower rate of fire than the MG08 or British Vickers when it was introduced, but the cyclic rate of about four hundred rounds per minute was increased by the utilization of a far stronger mainspring. The Schwarzlose, which was chambered for the standard eight-millimeter cartridge employed by the Austro-Hungarian Army, proved to be a reliable machine gun when used primarily as an infantry weapon. It remained the standard heavy machine gun for the Austrian Empire throughout the war.

After the war surplus weapons were used by the Czechoslovakian, Dutch, Romanian and even Swedish Armies. During World War II, some of the weapons were used by second-line units of the German Army while its Romanian Allies used a version that converted the weapon to 7.62x54mmR, which required the lengthening of the water jacket. Those guns were used with border guards and as anti-aircraft weapons and reportedly proved ineffective in that capacity.

After centuries of rivalry, Great Britain and France became close allies during World War I, but even then it was almost unheard of for either nation to use small arms from the other. There was one notable exception—the British adopted a special version of the French Hotchkiss M1909 Benét–Mercié light machine gun, which was developed and built initially by Hotchkiss et Cie. As the Hotchkiss factory in Saint-Denis near Paris was close to the front and there were fears that it could be captured by the Germans, production of the M1909 moved to Lyon while in 1915 the British government invited Hotchkiss to set up a factory in Coventry.

Thus a French-designed machine gun was produced in the UK as the Hotchkiss Portative. As it was lighter and more compact than the heavy water-cooled Vickers machine gun, the British military found the Portative more suitable for cavalry and mounted infantry units and the weapon was widely used in campaigns in Gallipoli and Palestine. It was carried by such noted units as the Australian Light Horse, New Zealand Mounted Rifles Brigade and the British Army’s Camel Corps.

One factor that aided in the portability was the weapon's ability to be fed either from cloth belts like other machine guns or from brass stripper clips that held 30 rounds—the latter option allowing a soldier to move forward without having to carry an ammunition box.

As it was actually introduced before the mass adoption of the Lewis Gun or the French Chauchat, the Hotchkiss Portative was among the first truly portable light machine guns to see combat in the Great War.

Much like the Austrian-produced Schwarzlose the Italian Fiat-Revelli Modelo 1914 was a machine gun that was visually similar to the Maxim in appearance but had internal workings that were quite different. It was unique for a water-cooled machine gun in that it offered selective-fire for both single-shot “semi-automatic” or fully automatic fire. It featured a recoil-delayed blowback mechanism and fired from a closed bolt.

With a rate of fire of around 500 rounds per minute, its cyclic rate was slower than the Maxim/Vickers guns but on par with the original version of the Schwarzlose—which seems fitting as these were used on opposing sides of the lines. It was chambered for the 6.5x52 millimeter Carcano round, which helped with ordnance supply issues but gun experts have noted it was underpowered compared to the other heavy machine guns of the era. Instead of being fed from a belt, the Fiat-Revelli Modelo 1914utilized a 50-round or 100-round strip-feed box magazine.

The Italian machine gun saw use in the Second Italo-Ethiopian War, while the Italian supplied it to the Nationalist forces during the Spanish Civil War. It was used in a limited capacity by the Royal Italian Army during World War II.

Along with the German MP-18, the Beretta M1918 has the distinction of being among the first submachine guns—and technically the Italian weapon predates the German effort. However, it grew out of the M1915 Villar-Perosa machine gun, which had been developed as an aircraft machine gun—albeit one that fired a 9-millimeter pistol round rather than the full rifle ammunition standard in other aircraft weapons of the era.

The Villar-Perosa was also unique in that it was a portable double-barreled weapon and consisted of two independent receivers and firing mechanisms that were attached together. It also had a high rate of fire that exceeded 1,500 rounds per minute but the 9-millimeter ammunition provides insufficient against enemy aircraft—not to mention that its range was limited—so the weapon was redeveloped for use as a ground-based submachine gun.

In its new capacity, the Beretta M1918 entered service in the spring of 1918, and some sources suggest it saw service a few weeks before the Germans deployed the MP-18 in battle. The two weapons have similarities in that each was mounted to a rifle stock and clearly inspired the next generation of submachine guns.

However, the Beretta weapon was unique in that it featured a folding bayonet—and thus truly was the first SMG to utilize a bayonet—while it featured a top-loading stick magazine rather than the side-fed magazine of the MP-18. The Italian weapon saw limited use at the end of the World War I and even some use during World War II.

Denmark remained neutral in World War I, yet its Madsen light machine gun was employed by both the Allies and Central Powers. The weapon first entered service in 1902 and predated the Hotchkiss Portative and Chauchat and was arguably the very first portable machine gun produced. Its first use in battle was during the Mexican Revolution, while it also saw use with the Imperial Russian Army during the Russo-Japanese War.

During World War I, it was used by the German Army, which had it chambered in the 7.92-millimeter caliber. It was used with infantry units, mountain troops and then at the end of the war with storm troopers.

It was also the first machine gun to feature a top-mounted magazine, in its case offset to the left side of the receiver to allow the sights to remain on the centerline. It featured a unique fully automatic falling block action with a mixed recoil-operated locking system, which resulted in a relatively slow rate of fire of just 450 rounds per minute. While sophisticated, its unique operating cycle proved to be a reliable system that could stand up to the harsh conditions of trench warfare.

The Madsen proved to be a reliable weapon and was produced in dozens of calibers and configurations—so much so that it has been used in literally dozens of conflicts over the past one hundred years, and a few of the weapons even remain in use with the Brazilian Military Police.