Forgotten War: How China Was Crushed By Vietnam in a 1979 Conflict 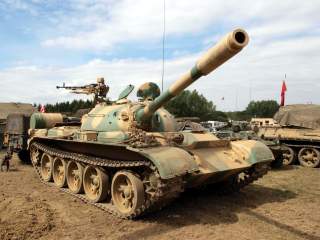 Key Point: Beijing and Hanoi released wildly contradictory claims regarding the casualties in the war. External studies estimate around 26,000 PLA killed in action and around 30 to 35,000 Vietnamese troops.

At 5 AM on February 17, 1979, a massive artillery bombardment rippled across Vietnam’s mountainous northern border with China. Waves of soldiers from the Chinese People’s Liberation Army (PLA) swarmed towards the startled Vietnamese soldiers hunkered down in border forts, bunkers and caves. Some outposts, taken by surprise, fell; others repelled the attacks with withering small arms and artillery fire.

However, east of the Vietnamese village of Dong Khe, sitting astride the Highway 4A connecting the key cities of Lang Son and Cao Bang, the diesel motors of two battalions of Type 59 tanks rumbled. Though small units of PLA tanks had sparred with UN forces during the Korean War, this would be their first large-scale engagement.

By the late 1970s, Communist factions involved in Southeast Asia had successfully overthrown Western-backed governments in Saigon, Vientiane and Phnom Penh. But like close friends torn apart by long-festering resentments and mistrust, the former allies soon turned against each other.

The Cambodian Khmer Rouge feared a renewal of historical Vietnamese domination. The Vietnamese harbored a similar fear of China. And the Chinese were locked in a bitter ideological feud with the Soviets. Thus in November 1978, Moscow signed a mutual defense treaty with Hanoi.

On February 15, Beijing announced it would launch a “defensive counterattack” to punish Vietnam. It also mobilized troops on its northern border with the Soviet Union.

Nine corps-sized armies averaging three divisions each were committed to the punitive campaign, which had three main objectives. On the western flank, three PLA armies would focus on capturing the border city of Lao Cai, defended by two PVA divisions. Meanwhile, six armies in the east under General Xu Shiyou would advance on Cao Bang and Lang Son—the latter astride a highway leading directly to Hanoi. This front was defended by four Vietnamese divisions.

Overall, the PLA had local numerical superiority of between three and six to 1 in its favor. Most of Vietnam’s elite regular units remained engaged in Cambodia, including its extensive inventory of Chinese, Soviet and U.S. tanks and jets.

The PLA’s infantry-heavy force was supported by roughly 600 tanks in six regiments for the campaign, plus a seventh held in reserve according to Nikolai Ezhov, a documenter of historical PLA organization. On the eastern Lang Son front, the 43rd Army’s tank regiment operated eighty Type 59 tanks, a Chinese clone of the Soviet T-54 tank with a lumpy cast-steel turret. Though outdated, the 40-ton Type 59 remained tough and reliable, with a rifled 100-millimeter gun and between 100 and 200-millimeters of sloped frontal armor.

However, the mainstay were four regiments of lighter twenty-three-ton Type 62 light tanks, a downsized Type 59 with a 85-millimeter gun designed for operations around Southern China’s rugged mountains, marshy rice paddies and subtropical forests. Yet with no more than 35- to 50-millimeters of frontal armor, the Type 62 was vulnerable to even light armor-piercing weapons. The regiments, counting 107 tanks each, included organic tank regiments of the 42nd and 43rd and 55th armies in the east and an independent unit near Lao Cai.

A Chinese unit history describes how the two 43rd Army tank battalions east of Dong Khe were accompanied by a battalion of infantry and a platoon of engineers. However, the PLA forces almost entirely lacked mechanized transport, with fewer than 100 Type 63 armored personnel carriers. Xiaoming Zhang describes the drastic works-around adopted in Deng Xiaoping’s Long War:

“Such were the crudities of operational art that PLA infantry fastened themselves to the top of tanks with ropes so that they would not fall off. Accordingly, when they came under enemy fire, they were effectively bound in place...”

As the tanks barreled down a crude canyon, their riders were raked by small arms fire from above. The tanks rumbled on, ramming through an improved roadblock made of boulders. However, when a Type 59 attempted to cross the River Bang, a wooden bridge collapsed beneath it.

Instead, Chinese tankers forded the river assisted by engineers, as mortar and anti-tank rounds rained down from overlooking heights. Several tanks bogged down during the crossing, and another was picked off by an anti-tank missile.

After losing fifteen tanks, the survivors forged through the bombardment and at 10 AM rolled into an undefended Dong Keh. The Vietnamese had not expected enemy forces to penetrate down the mountainous, 18.5-mile long road so fast. But meanwhile, the Vietnamese opened a dam to flood the ford.

The capture of Dong Khe was only one of dozens of targets assaulted by the PLA to mixed success on February 17. But because most PLA units could only advance at walking speed, they couldn’t rapidly exploit its breakthroughs.

The PLA also lacked a modern communications and supply systems, relying on human or animal labor to carry a third of its supplies, and hand and signal flags for tactical communications. Deficient training and educations due to the near-collapse of schooling during the Cultural Revolution (1966-1976) was also an issue. Peasants hastily levied for the conflict often received only one or two practice sessions with live ammunition and grenades prior to being sent into combat. One army hastily implemented a policy of teaching three soldiers out of every company how to read maps.

Meanwhile, Vietnamese militias and special operatives launched deadly raids and ambushes on PLA supply lines, and rear-area night attacks intended to trick Chinese artillery into firing on their own troops. According to legend, a lone Vietnamese female sniper managed to kill eight PLA tank commanders before being captured and crushed under a tank by vengeful soldiers.

Here the PLA tankers encountered Vietnamese tankers in T-34/85 tanks of the 407th Tank Regiment. The dated but reliable World War II-era medium tanks actually had a fighting chance against the lightly-armored Type 62s, but the Chinese claimed fourteen T-34s for no loss and captured three, one of which is now displayed in a Chinese museum. In another encounter, a PLA 122-millimeter howitzer battalion reported knocking out six T-34s at long range.

On March 2, Chinese forces secured half of Lang Son. Edward Chen in “China’s War With Vietnam, 1979” described the final push:

The final assault was launched on March 3 preceded by the seizure of Hill 303. Tanks led the infantry in a head-long rush for only ten minutes; then the hill was captured. Shortly after, the Vietnamese artillery on Khua Ma Son mountain heavily bombarded the PLA on that hill. The Chinese tanks once again coordinated with the infantry. After fierce exchanges of fire power, mine explosion, and tunnel blowing-up, the six Vietnamese firing positions on the mountain were destroyed one after another. Finally rockets fired from the mountain's top signaled its capture.

PLA forces now held a highway leading directly to Hanoi eighty miles away. On March 5, Vietnam announced a general mobilization of the population, and began airlifting units out of Cambodia. Simultaneously, Beijing announced its campaign had concluded and began withdrawing troops.

And the Soviets? Moscow decided direct military intervention was too risky and logistically impractical, though it did assist Vietnam with air transport, naval communications and arms shipments. China had demonstrated its regional primacy, but Moscow and Hanoi only drew closer.