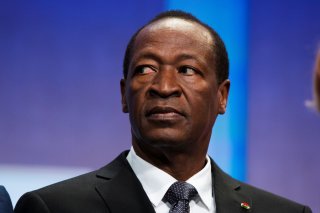 Military prosecutors in Burkina Faso requested that Blaise Compaore, the country’s former president, be sentenced in absentia to thirty years in prison for his role in the overthrow and murder of his predecessor, Thomas Sankara.

The prosecutors asked the military court, which convened on Tuesday, to find Compaore guilty of a number of charges, including an “attack on state security,” “complicity in a murder,” and the “concealment of a corpse,” according to Al Jazeera.

The trial is scheduled to resume on March 1, following a suspension requested by Compaore’s defense team.

Sankara, who ruled Burkina Faso from 1983 until his death in 1987, initially secured power in a military coup masterminded by Compaore. During his brief tenure, Sankara became one of the most prominent leaders in post-colonial Africa. He launched sweeping agricultural reforms, substantially increasing the country’s grain output, while cracking down on corruption and improving the country’s education and public health systems. In 1984, he renamed the country Burkina Faso, or “Land of the Honest Men,” from Upper Volta, its colonial moniker.

A devoted Marxist sometimes nicknamed “Africa’s Che Guevara,” Sankara nationalized many industries and banned archaic practices including forced marriages, polygamy, and female genital mutilation. He attempted to bolster the country’s self-sufficiency, rejecting aid from the West but also refusing to align politically with the Eastern Bloc.

In spite of his popularity among Burkinabe citizens and other pan-Africanists, Sankara was overthrown and killed by Burkinabe troops loyal to Compaore, who succeeded him in office. Compaore ruled Burkina Faso until a 2014 popular uprising forced him to flee to neighboring Cote d’Ivoire.

Although Compaore is absent from the trial, several co-defendants also involved in Sankara’s murder are present. Altogether, fourteen people have been charged with the murder; twelve of them appeared before the court in Ouagadougou, Burkina Faso’s capital.

In addition to Compaore’s sentence, the prosecutors recommended thirty years in prison for Hyacinthe Kafando, the suspected leader of the assassination squad, who fled the country in 1996. It also recommended twenty years for Gilbert Diendere, a senior military officer at the time of the coup, who was separately imprisoned in 2015 for attempting to overthrow the transitional Burkinabe government.

Compaore’s lawyers have argued that, as a former head of state, he enjoys immunity from prosecution. Separately, Compaore, who remains in exile in Cote d’Ivoire, has criticized the trial as “political” and refused to return to Burkina Faso to stand before the tribunal. Although Burkina Faso and Cote d’Ivoire have an extradition agreement, it remains unclear whether Compaore would actually be extradited if found guilty.