Founders: Removal from Office Is Not the Only Purpose of Impeachment 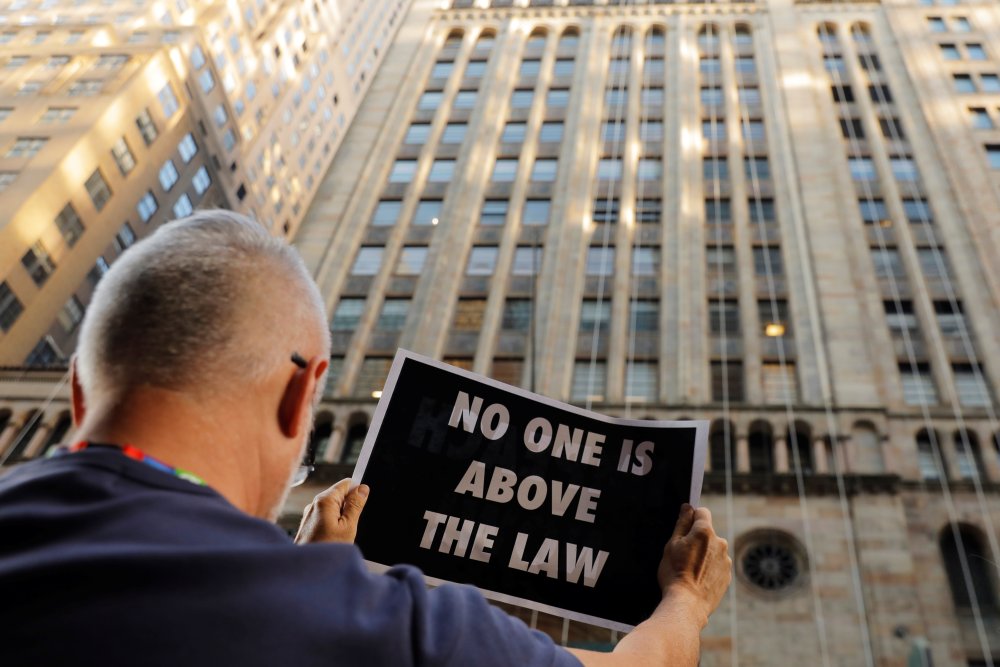 As Congress moves toward a possible formal impeachment of President Donald Trump, they should consider words spoken at the Constitutional Convention, when the Founders explained that impeachment was intended to have many important purposes, not just removing a president from office.

A critical debate took place on July 20, 1787, which resulted in adding the impeachment clause to the U.S. Constitution. Benjamin Franklin, the oldest and probably wisest delegate at the Convention, said that when the president falls under suspicion, a “regular and peaceable inquiry” is needed.

In my work as a law professor studying original texts about the U.S. Constitution, I’ve found statements made at the Constitutional Convention explaining that the Founders viewed impeachment as a regular practice with three purposes:

The Convention delegates repeatedly agreed with the assertion by George Mason of Virginia, that “no point is of more importance … than the right of impeachment” because no one is “above justice.”

One of the Founders’ greatest fears was that the president would abuse his power. George Mason described the president as the “man who can commit the most extensive injustice.” James Madison thought the president might “pervert his administration into a scheme of [stealing public funds] or oppression or betray his trust to foreign powers.” Edmund Randolph, governor of Virginia, said the president “will have great opportunitys of abusing his power; particularly in time of war when the military force, and in some respects the public money will be in his hands.”

Gouverneur Morris of Pennsylvania worried that the president “may be bribed by a greater interest to betray his trust and no one would say that we ought to expose ourselves to the danger of seeing [him] in foreign pay.” James Madison, himself a future president, said that in the case of the president, “corruption was within the compass of probable events … and might be fatal to the Republic.”

William Davie of North Carolina argued that impeachment was “an essential security for the good behaviour” of the president; otherwise, “he will spare no efforts or means whatever to get himself re-elected.” Elbridge Gerry of Massachusetts pointed out that a good president will not worry about impeachment, but a “bad one ought to be kept in fear.”

Until the very last week of the Convention, the Founders’ design was for the impeachment process to start in the House of Representatives and conclude with trial in the Supreme Court.

It was not until Sept. 8, 1787, that the Convention voted to give the Senate instead the power to conduct impeachment trials.

This is clear evidence that the Convention at first wanted to combine the authority and resources of the House of Representatives to conduct the impeachment investigation – a body they called “the grand Inquest of this Nation” – with the fairness and power exemplified by trial in a court.

Even though trial of impeachments was moved from the Supreme Court to the Senate, Congress can still draw on the example of court procedures to accomplish an effective inquiry, especially if they are trying to get information from uncooperative subjects. In many of the investigations that are now part of the House’s impeachment inquiry, the Trump administration has refused to hand over documents and blocked officials from testifying to Congress.

When courts are stonewalled

In civil cases, courts have powerful tools for dealing with someone who blocks access to the very information needed to judge the allegations against him.

The most commonly known method is the rule that says that once a person is legally served with a lawsuit against them, they must respond to the complaint. If they don’t, the court can enter a judgment against them based on the allegations in the complaint. But there are other processes as well.

One court tool that could easily be adapted to the impeachment process comes from the federal rules of civil procedure. In a process called “request for admission,” one party to a lawsuit can give their opponents a list of detailed factual allegations with a demand for a response.

If the party does not respond, the court can treat each allegation as if it were true, and proceed accordingly. If the respondent denies one or more particular allegations, there is a follow-up procedure called a request for production, demanding any documents in their possession or control supporting the denial. If the respondent refuses, again the court has the power to order that the alleged fact be taken as true.

Getting to the Truth

In an impeachment process against President Donald Trump, the House of Representatives could present the president with a request for admission to the following two simple factual statements, which could be inferred from a whistleblower complaint:

The House could give Trump a brief amount of time to respond, including providing any evidence that might disprove the allegations.

If he refused to respond, or if he denied but refused to produce supporting documentation, the House could assume the set of alleged facts to be true and include them in articles of impeachment. Then the House could vote and, depending on the outcome of that vote, the matter would then proceed to the Senate for trial.

Congress could engage in a long, drawn-out battle trying to use its oversight and subpoena powers to force various executive branch officials to release documents or testify about what they saw, heard and did. Or they could try this simple and quick procedure, which does not require the cooperation of the Department of Justice or court action.

Good for the President and the Country

Benjamin Franklin told his fellow delegates the story of a recent dispute that had greatly troubled the Dutch Republic.

One of the Dutch leaders, William V, the Prince of Orange, was suspected to have secretly sabotaged a critical alliance with France. The Dutch had no impeachment process and thus no way to conduct “a regular examination” of these allegations. These suspicions mounted, giving rise to “to the most violent animosities & contentions.”

The moral to Franklin’s story? If Prince William had “been impeachable, a regular & peaceable inquiry would have taken place.” The prince would, “if guilty, have been duly punished — if innocent, restored to the confidence of the public.”

Franklin concluded that impeachment was a process that could be “favorable” to the president, saying it is the best way to provide for “the regular punishment of the Executive when his misconduct should deserve it and for his honorable acquittal when he should be unjustly accused.”