The Founding Fathers Warned Us About Judges Rewriting the Constitution 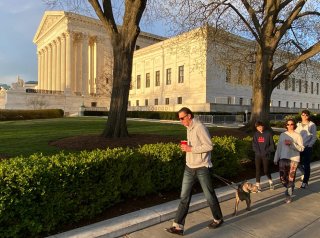 Many Americans know precious little about our system of government; the judicial branch is especially mysterious.

In a recent article published in The Atlantic, Harvard Law School professor Adrian Vermeule deepens that confusion by rejecting how America’s Founders designed the judiciary to follow the Constitution in favor of judges’ power to control the Constitution.

The American people use the Constitution to set rules for government, including giving separate jobs to the three branches. Students learn in civics class that the legislative branch makes the law, the executive branch enforces the law, and the judicial branch interprets the law.

Each branch is supposed to follow the Constitution’s rules and stick to its assigned job.

That includes judges. From the beginning, the question has been how much leeway judges should have when they interpret written law such as the Constitution or statutes.

You and I interpret written things all the time and, when we do, we try to figure out what the author meant by what the author wrote. That way, it means the same thing to everyone.

The Founders put the Constitution in writing and designed the judiciary to interpret it the same way. That way, judges can’t just make it up as they go along. Today, this approach often is called “originalism” because the Constitution’s original meaning is the one that counts, whether judges like it or not.

The first three words of the Constitution, after all, are “we the people.” We make the rules for government and government, including the judiciary, is supposed to follow those rules.

That’s exactly what Vermeule’s new system—which I critique in more detail in a legal memorandum —requires so that government would become much more powerful.

He thinks that government should help us “form more authentic desires for the individual and common good, better habits, and beliefs that better track and promote communal well-being.”

Oh, and the Harvard law professor says that you and I, whom he calls “subjects,” eventually will come to “thank the ruler” for it.

In his article, Vermeule describes all sorts of things he wants this uber-powerful government to do for us: protect us from pandemics, climate change, corporations, the free market, corporate exploitation of the environment, and employers’ exploitation of workers as “atomized individuals.”

Wait, what? Is that what government is supposed to do? The way America’s Founders designed it, government doesn’t exist to manipulate our beliefs, desires, or habits. The Declaration of Independence says that government exists to secure our unalienable rights such as life, liberty, and the pursuit of happiness.

No wonder Vermeule wants to change the Constitution. That’s the only way to radically transform the power and purpose of government.

But he wouldn’t let the American people decide whether they want to change their own Constitution; he wants the revolution to come from judges, who are supposed to follow the Constitution.

He calls his system “common-good constitutionalism” and would have judges “read into” the Constitution various principles and meanings that would turn it into a different Constitution altogether.

Thomas Jefferson, for example, warned that if the Constitution means whatever judges want, it would be like “a mere thing of wax, that they could twist and shape it into any form they please.”

For Mason, this was a dangerous unintended consequence; for Vermeule, it is the heart of his new system.

The Founders designed the unelected judicial branch to be the “weakest” and “least dangerous.” Vermeule would turn that on its head and urge what Supreme Court Justice Antonin Scalia once called “power-judging.”

William F. Buckley said that he would rather be governed by the first 2,000 names in the telephone directory than the Harvard University faculty.

I would rather be governed by the American people and those we elect than by unelected judges.

This article by Thomas Jipping first appeared in The Daily Signal on April 4, 2020.