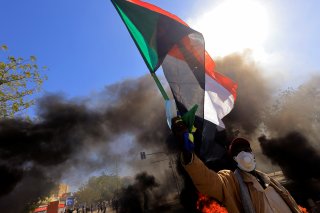 Sudan’s security forces shot and killed four protesters during nationwide demonstrations on Thursday, as thousands of Sudanese took to the streets to demand a return to civilian rule in the country after its October 2021 coup d’etat.

The deaths occurred in Omdurman, the sister city of Sudanese capital Khartoum, according to the Central Committee of Sudanese Doctors (CCSD). They appear to have occurred while protesters attempted to cross a bridge linking Omdurman to the capital, which had been fortified ahead of time by security forces. The protesters’ goal was to reach the presidential palace, a focal point of previous demonstrations against the coup’s leaders over the past two months.

Other demonstrations on Thursday, both in Khartoum and Omdurman, were broken up by security forces using tear gas and rubber bullets. The capital has also been subject to a communications blackout disrupting telephone and Internet service.

Protests in Sudan, both in Khartoum and around the country, have continued sporadically since October 25. That’s when Sudanese military leader Gen. Abdel Fattah al-Burhan seized control over the transitional government and dismissed its civilian representatives. The last major day of protests occurred on December 25 when clashes between demonstrators and security forces led to more than two hundred injuries but no known deaths, according to the CCSD.

The demonstrations on Thursday marked the eleventh day of mass action against the Burhan-led government since October 25.

Sudan had been praised for the stability of its democratization process following the 2019 ouster of dictator Omar al-Bashir. But the country experienced a dramatic reversal in its fortunes after the coup. The United States, European Union, other Western countries and international organizations immediately cut off assistance to Burhan’s government. Additionally, they instituted economic sanctions that cost Khartoum billions of dollars in lost aid revenue.

In response to domestic and international pressure, Burhan agreed to reinstate Prime Minister Abdalla Hamdok who had led the transitional government before his overthrow and imprisonment on October 25. However, this step has not satisfied most protesters. They have continued to push for the creation of a civilian government and the military’s exit from the transitional process altogether.

The U.S. Embassy in Khartoum urged calm in the run-up to the protests on Thursday. An official statement indicated Washington’s “support for peaceful expression of democratic aspiration,” and cautioned Sudanese security forces to use “extreme discretion in use of force.”

At least fifty-two Sudanese civilians have been killed by security forces in street protests since the beginning of the coup.