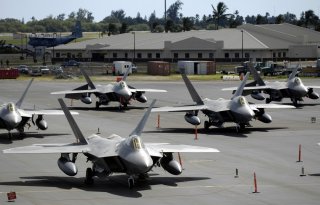 Four nuclear-capable Tu-95MS strategic bombers of the Russian Aerospace Force conducted a patrol flight in the neutral waters near Alaska and were intercepted and escorted by U.S. F-22 fighter jets early Wednesday.

According to Russian state media the four Tupolev Tu-95MS bombers took off from the airfields in the Chukotka Autonomous Area and the Amur Region, and performed a patrol flight over the neutral waters of the Chukchi, Bering and Okhotsk Seas and the northern part of the Pacific Ocean.

"The flight lasted about 11 hours… At some sections of the route, the Russian aircraft were escorted by U.S. Air Force F-22 fighters," said a spokesperson for the Russian Defense Ministry as reported by Tass.

The T-95MS bombers performed the flights in strict compliance with the international rules and without violating the airspace of other states, the Defense Ministry added.

FoxNews also reported that the Russian bombers were accompanied by U.S. F-22 Raptors during some periods of the 11-hour flight.

This is just the most recent such Russian patrol flight near Alaska and follows a similar incident in April when the U.S. Air Force scrambled F-22 jets to intercept a pair of Russian patrol aircraft in the neutral waters of the Bering Strait.

These flights into neutral waters and airspace are actually common. In May 2019, four Tu-95MS strategic missiles carriers conducted sorties over the Chukotka, Bering and Okhotsk seas, as well as along the western coast of Alaska and the northern coast of the Aleutian Islands. The entire flight with the Cold War-era four-engine turboprop-powered strategic bombers lasted some 12 hours, during which time the Russian aircraft were also escorted by United States Air Force F-22 fighter jets.

It is notable that these Russian patrols have involved the Tu-95, which is one of the oldest designs in active service in the Russian Aerospace Force (Air Force). It is driven by eight contra-rotating turboprop engines and is now the only propeller-powered bomber to remain in active service worldwide. The Aerospace Force has upgraded the aircraft significantly – well beyond its original capability to drop unguided bombs. The aircraft, which has been in service for more than 60 years, is notable in that it can cover such great distances while carrying a hefty payload.

It isn't just the Russian bombers that have been conducting such patrols in the region. The Russian Defense Ministry said that U.S. Air Force strategic bombers had performed flights along the Russian borders at least five times in May. Such patrols would be routine.

In addition, to counter the Russian bomber escalation, the U.S. Air Force deployed F-35 Joint Strike Fighters to Eielson Air Force Base in the Alaskan interior in April. The National Interest previously reported that the two single-engine F-35As flew directly from Lockheed Martin’s factory in Fort Worth, Texas to Eielson. An array of Alaska-based Air Force aircraft met the F-35s over the northern state, including a KC-135 tanker, three F-16s, and two F-22s.

To date, the Air Force's F-35 have not performed any escort duty to the Russian Tu-95 bombers.