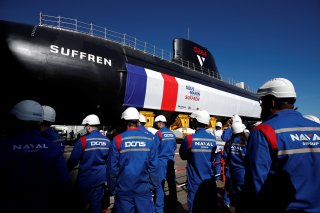 This week the French Navy (Marine Nationale) announced that its first-in-class nuclear-powered attack submarine (SSN) Suffren had arrived in Brest to begin the second phase of its sea trials, which are to include deepwater tests. The submarine is named for the nineteenth-century French Admiral Pierre André de Suffren and is the first of six planned Barracuda-class boats.

She had performed a static dive test as part of its initial sea trials in the English Channel near Cherbourg in late April. During its sea trials it drew the attention of the Russian Navy’s RFS Akademik Pashin. Officially, a Project 23130 replenishment tanker/oiler, but Akademik Pashin is believed to be a spy ship that was likely paying close attention to the new class of the French SSN.

Despite the snooping Russian eyes, the sea trials were completed without incident and the submarine has headed to Brest, a port city located in the Finistère département in Brittany.

The need to transition from Cherbourg for the deepwater tests was because the waters in the English Channel are too shallow, Naval News reported. These deepwater tests are the second of three sea trials needed to be completed before the submarine is officially handed over to the French Navy.

In the late summer or early fall the Suffren will head to the Mediterranean port of Toulon for testing of the submarine’s weapons systems including the test-firing of an F21 heavyweight torpedo, an SM39 Exocet Block 2 Mod 2 anti-ship missile and a naval cruise missile. When all of the testing is completed, the Suffren will be delivered to the French Navy—likely later this year—and she will be commissioned and homeported.

The Barracuda-class is smaller than ballistic-missile submarines but at five thousand tons is roughly double the displacement of the Rubis-class, which it is replacing. This is still significantly smaller than the attack submarines of other nations—such as the American Seawolf-class and Virginia-class, which are each over 8,000 tons; while the Royal Navy’s Astute-class is roughly 7,500 tons.

This new class has a smaller crew complement of just sixty to sixty-three sailors. A smaller crew would seem ideal for a modern submarine force but it is not without drawbacks. Fewer hands on deck mean quicker crew rotations and greater crew fatigue, which can lead to mistakes—but each sailor will receive an individual bed instead of having to share hot bunks.

It is also reported to be far quieter than other SSNs due to the fact that the submarine draws on new technologies developed for the Triomphant-class SSBN, including an ultra-quiet pump-jet propulsion system instead of a regular propeller, which particularly enables quieter movement at higher speeds.

France’s latest SSN project is now about six years behind schedule but only slightly over budget. This was in part due to difficulties in miniaturizing its 150-megawatt K15 nuclear reactor, which takes up less space and will refueling every ten years instead of the previous class’s seven-year cycle. The Suffren is expected to remain in service until the 2060s at least.