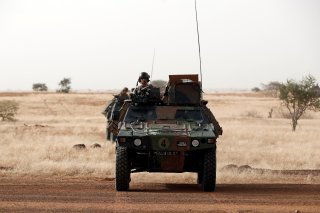 The French government announced on Monday that its final remaining troops had left Mali, formally ending the country’s decade-long participation in the counterterror campaign against Islamist rebel groups in the north and east of Mali.

A statement by the French military indicated that the “final contingent of the [Operation] Barkhane force still on Malian territory crossed the border between Mali and Niger” at 1:00 pm Paris time. It added that the Army had met the “major military logistics challenge [of the withdrawal] in an orderly and safe fashion.”

A statement from French president Emmanuel Macron’s office indicated that French troops would remain in Burkina Faso, Chad, Mauritania, and Niger—all of which have confronted a region-wide explosion in jihadist activity over the past decade—as part of Operation Barkhane, a regional military campaign aimed at ending Islamist rebel violence across the sparsely-populated Sahel region. Macron’s office stated that Mali would be replaced by Niger as the hub of French activity in the area.

The Sahel crisis began in 2012 when Tuareg rebels in northern Mali declared independence from the government in the south and formed an alliance with Islamist rebels. The Islamists, heavily armed with weapons captured from storehouses in Libya during the uprising against dictator Muammar Gaddafi, soon came to dominate the north. Following the French intervention in 2013, the groups fanned out across the Sahel, creating a regional security threat.

The French decision to withdraw from Mali came after a pair of military coups in 2020 and 2021 strained relations between Paris and Bamako. Although the military junta continued its cooperation with Operation Barkhane, the French government protested the coups and pressured the new government of Col. Assimi Goita to return power to a civilian administration within a short timeframe, leading to a deterioration in bilateral relations. The French-Malian partnership further deteriorated when the new government sought to hire Russian mercenaries from the Wagner Group—implicated in several massacres against civilians in Mali—as an alternative to French troops. The junta has denied hiring mercenaries, although it has admitted that “Russian trainers” were present in the country to advise Malian security forces.

Roughly 2,400 French troops had been stationed in Mali at the time of the withdrawal announcement in February. Although French troops will depart, the United Nations peacekeeping force in Mali, MINUSMA, will remain present in the country.