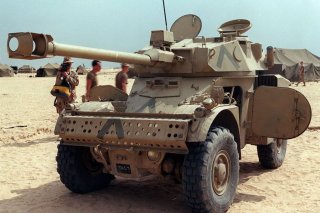 France likes armored cars. The Panhard AML is an odd-looking vehicle, and no exception to this rule. Half armored car, half tank, the mish-mash of parts has several upsides. It combines the speed and off-road agility of a 4x4 SUV with the firepower of a small tank onto one nimble platform—and is cheap to boot. Here’s what makes it the everyman’s tank.

The French AML was intended to fill a specific niche within the French armed forces who needed a platform that combined a low curb weight—for easy air transport, to be used by paratroopers—and decent firepower for use in austere, remote environments.

Generally speaking, the AML was not intended to take on the best and heaviest of what the Warsaw Pact would throw against NATO Allies, but rather to conduct reconnaissance, patrols, and pull other non-front line duty. Nevertheless, the AML would be placed on front lines overseas, especially with the French Foreign Legion in parts of North Africa and among former French colonies.

One of the conflicts where the AML saw considerable involvement was in Beirut during the Lebanese Civil War. In that conflict, the AML excelled thanks to its good maneuverability. The AML’s high-explosive and HEAT rounds were also used to devastating effect in that tight urban battlefield—the large amounts of rubble and debris the AML caused actually helped the platform, as it could more easily maneuver through wreckage than other vehicles.

One U.S. Army study of the conflict praised the AML to an extent, stating that “the Panhard armored car operated effectively in Beirut. The ease with which the Panhard is driven and repaired, and the absence of tracks, provide the mobility desirable in an urban environment.” Though not an overwhelming endorsement, it shows the AML’s qualities.

Despite the aforementioned qualities, the AML was by no means a panacea—especially for the AML crew. A look into the AML’s interior shows why.

The driver sat right behind the front hull glacis, behind a thin layer of steel. He had an out-ward opening hatch that when open, left him extremely exposed. The gunner relied on simple optical sights to aim the gun, and used manual turret cranks to alter the direction the gun pointed.

The AML wasn’t air-conditioned, and all three crew members (yes, three people would be packed inside the small armored car) no doubt accordingly suffered, especially in the hot climates of North and Subsaharan Africa where the AML saw the most service.

Though production of the AML probably ended sometime in the 1980s, the French Army still exported the AML, especially to countries Paris shared a colonial past with, giving the Panhard AML another lease on life and a reputation for decent firepower on the cheap.