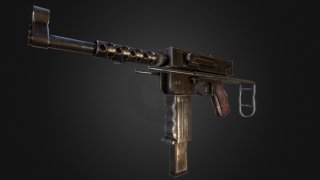 The French military doesn’t exactly have what can be called a “stellar” battlefield record in the twentieth-century, so the words “best,” “French” and “submachine gun” aren’t likely to be in the same sentence. Except when it comes to the MAT-49, which was arguably one of the best submachine guns of the early Cold War and it was made by the French!

It was developed by French arms factory Manufacture Nationale d’Armes de Tulle (MAT) and was among the first weapons to be produced during the French Fourth Republic, which existed from 1946 to 1958. Having been liberated from the Nazis only in 1944, the French military was still very much in what could be described as a period of reform in the late 1950s. At the same time, it was beginning to deal with its colonial empire, including French Indochina and Algeria–among other potential “hotspots.”

Prior to World War II, the French Army adopted the MAS-38 submachine gun, a truly compact weapon that was chambered for the 7.65mm Longue cartridge, which was also used in the newly introduced Model 1935A sidearm that was developed for the French Army. The MAS-38 only entered service just before the outbreak of the war and was never produced in large numbers.

After the war, France sought to develop a new semi-automatic rifle to replace the MAS-36 bolt action rifle and a new submachine. The result in the latter case was the MAT-49.

French arms designer Pierre Monteil took cues from successful wartime designs, such as the German MP40 and British Sten Gun, and developed a weapon that could be made from stamped steel, which was a necessary consideration given the large number of weapons needed for the Army, French Foreign Legion and other military units. As with other early Cold War submachine guns, the MAT-49 featured a rudimentary blowback operation, which eliminated the need for an extractor, but also made a weapon that had few parts to break.

It featured flip-up, L-shaped rear peep sights that were set to fifty meters on one side and 100 meters on the other. The MAT-49 also featured a wire-frame buttstock that was similar to the American M3 “Grease Gun.” It was chambered for the widely-used 9x19mm Parabellum round and fed from either a twenty or thirty-two round stick magazine and had a rate of fire of around 600 rounds per minute.

Among the most innovative features of the MAT-49 was its magazine housing, which would be folded forward below the barrel to make the weapon even more compact. This was a feature employed by French paratroopers when jumping into action, but it also provided an additional safety as the weapon couldn’t be fired until the magazine was folded down to the open position.

The MAT-49 was produced in a few versions, including one for the French Army/Foreign Legion, which could only fire in full automatic mode, while some also produced for the Gendarmerie and police that featured dual triggers for both semi-automatic and full-automatic modes. Some police models also featured longer barrels and a non-retractable wooden stock.

The versions made for the French military were widely used in the First Indochina War as well as in the Suez Crisis of 1956, while the weapon has seen use in conflicts around the world including the Second Indochina War (the Vietnam War), where weapons captured by the People’s Army of Vietnam were converted to fire the Soviet 7.62x25mm TT pistol cartridge.

The MAT-49 remained in production until 1979, when the French Army adopted the FAMAS. However, the MAT-49 was not withdrawn from service in France until 1998 and it still remains in use with militaries and police forces around the globe.