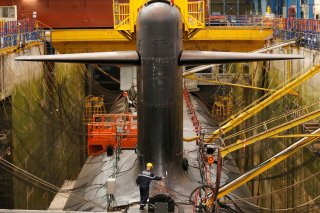 The Perle, one of France’ Rubis-class submarines caught on fire while on a dry dock for a major renovation. Though the class is nuclear powered, French officials maintain that no weapons nor fuel were onboard the Perle at the time of the fire.

According to those who witnessed the fire, the blaze likely started as a result of soldering or related metalwork. Stray sparks may have caused wood or oil residue to catch first, with the fire spreading from the initial sparks to the submarine itself. The intense blaze lasted for over 14 hours before French firefighter crews were able to subdue the flames.

The Rubis-class was originally launched back in 1983, making the class almost 40 years old, and in need of retirement. Still, as a whole the class is considered capable despite its advanced age.

The newest of the class, the Saphir, managed to maneuver into a favorable firing position with the United States Navy Carrier Strike Group 12 in 2015. Moving undetected past the Group’s defenses, the Saphir would have been able to sink the USS Theodore Roosevelt had the aircraft carrier been a hostile ship.

A total of six Rubis-class summaries were built near the end of the Cold War, between 1983 and 1993. Ideally two or three of the class are constantly at sea at any one time, conducting patrols. Today, only three Rubis-class submarines are available at any given time.

The first of the Rubis-class, the Rubis is currently undergoing routine maintenance. Another of the class, the Saphir was decommissioned last year. And, with the Perle out for the count, France would be hard pressed to keep even two of the class out at sea at any one time, let alone three.

Though the Perle’s hull remains intact, French naval officials stated that it remains to be seen if the submarine is recoverable, or a total loss. Due to the length and intensity of the blaze, the submarine’s steel may have been structurally compromised beyond repair.

Steel used in building submarine hulls needs to be both stiff enough to withstand crushing water pressure at depth, and elastic enough to resist the wide fluctuations in pressure at sea. As a result, the hull may have to be written off completely. If so, the Rubis-class would be down to a paltry four hulls.

The class is set to eventually be replaced by the newer and more technically-sophisticated Barracuda-class. Indeed, the recent fire may hasten the Barracuda-class’ introduction.